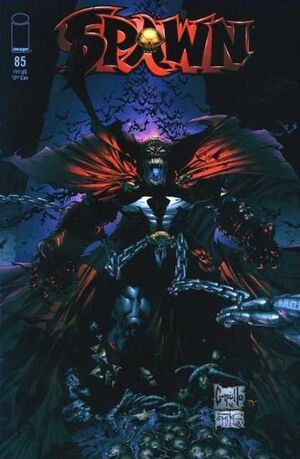 Billy Kincaid walks through the streets in the body as Officer Rafferty. When he confronts Spawn, Spawn take off.

Sam Burke and Twitch Williams warn Wanda Blake that her and her family need to leave. Wanda tells them they aren't talking to cops and they aren't leaving due to find vague threat.

After getting a call, Sam and Twitch speed to an alley. Twitch starts to get uneasy as he notices Rafferty doesn't follow the same profiling. He is a good man opposed to the other Kincaid victims.

Kincaid chases Spawn and shots him in the arm. He thinks he has Spawn cornered. As he gets close, Spawn flips Kincaid into the Dead Zone where Hell has no power. Cogliostro and the other bums form a right circle around the Dead Zone to keep Billy and Spawn locked inside with a fight to the death. Twitch interrupts and shoots Kincaid in the head. Spawn tells them he can no longer sense Kincaid's presence and Twitch experiences remorse for his actions.

Retrieved from "https://imagecomics.fandom.com/wiki/Spawn_Vol_1_85?oldid=59726"
Community content is available under CC-BY-SA unless otherwise noted.