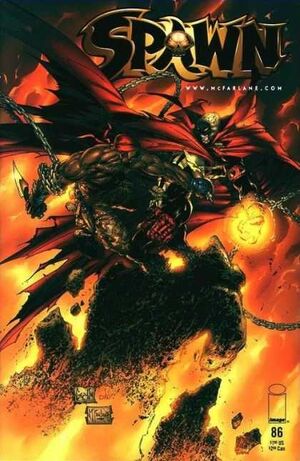 Spawn becomes frustrated with Cogliostro. He tells him he doesn't like going about things his way. Suddenly, Spawn is haunted by the mortal spirit of himself. The vision tells Spawn to move on with his life. He is no longer Al Simmons. When he tells him that Wanda Blake doesn't love him, Spawn flips out in anger and kills the spirit.

Looking at himself murdered, he shows remorse for his actions.

Spawn returns to the alleys and informs all the bums they need to leave, immediately. He used his magic to explode the alleys as he tells Cog he quits.

Retrieved from "https://imagecomics.fandom.com/wiki/Spawn_Vol_1_86?oldid=51253"
Community content is available under CC-BY-SA unless otherwise noted.