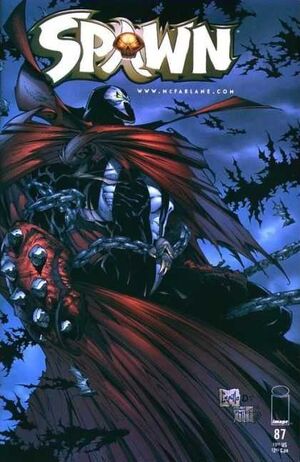 Ethan Crone writes about the supposed myth of a man named Spawn in New York City. A city with a history of broken dreams and bloodshed.

Ethan heads around town interviewing various members and leads. He stumbles into Rat City and is terrified when Spawn stands before him. He cowers in the corner asking to die. When he opens his eyes Spawn has disappeared.

Later, he asks for the truth from Cogliostro. Cog claims there never was a Spawn. Ethan throws down his paper and gives up on the story.

Retrieved from "https://imagecomics.fandom.com/wiki/Spawn_Vol_1_87?oldid=51368"
Community content is available under CC-BY-SA unless otherwise noted.