"The Devil You Know" 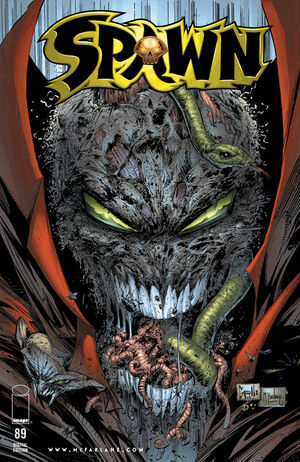 Appearing in "The Devil You Know"

Plot Synopsis for "The Devil You Know"

Spawn heads to the Hellspawn Archives. Inside, Mammon waits for him and tells him he must complete his task. When Spawn refuses to play by his rules, Mammon tells him he's open to negotiations and won't be two-faced about it the way Malebolgia was.

Spawn reveals he is no longer bound to help as he picks up a Dimensional Lance. Spawn tells him he doesn't need Hell's help, instead Hell needs him. He marks Mammon with a scar on his face and tells him to get lost as this is his realm now.

Retrieved from "https://imagecomics.fandom.com/wiki/Spawn_Vol_1_89?oldid=52179"
Community content is available under CC-BY-SA unless otherwise noted.