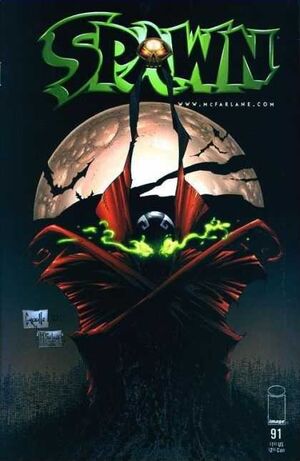 Mark of the Beast is a powerful man. He meets with his cronies when a young girl asked for a place to stay. He places a cigarette between her arms and tells her if she doesn't flinch she can stay. The cigarette burns her skin and she drops it to the ground.

In New York City, Mammon possesses a boy. He has the boy walk up to Spawn in an alley and inform him he can't hide. Mammon reminds him they made a deal and that he wants what is his. Spawn shrugs him off and leaves.

At his apartment, Mark practices occult. He heads out to town and runs into Renee again. He offers her to come back with him to see magic. He drugs her and begins a spell. Spawn shows up and Mark casts a binding spell on him to keep him trapped as Renee is trapped in a cage.

Solicit = Renee', a young runaway, has her bravery and pain tolerance tested in exchange for a place to stay in an abandoned house. Later, Mark, the master of the house drugs her and begins a sacrificial ceremony when Spawn intervenes. And even though Mark demonstrates a hypnotic power over others he comes in contact with, he wants Spawn's powers. Mark makes Spawn an offer to exchange powers and lives.

Retrieved from "https://imagecomics.fandom.com/wiki/Spawn_Vol_1_91?oldid=67518"
Community content is available under CC-BY-SA unless otherwise noted.