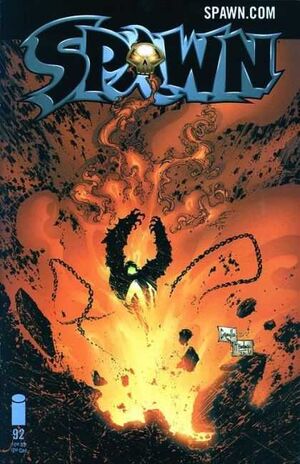 Mark of the Beast offers Spawn a chance to switch spots with him. He wants to be the Hellspawn and will sacrifice Renee to make the switch happen.

Spawn shows him what hell would be like for him. Mark embraces it and tells him he's dying so he might as well make the deal. Spawn leads him up a tower where he can see all of Hell. Mark continues to tell him he wants to trade places. Spawn cures him of his terminal ailment. This continues to fail to dissuade Mark from becoming the new Hellspawn.

Spawn tells him it was the wrong answer and informs him his spells aren't powerful enough to contain him. Spawn throws Mark off the roof and impales him on the trident of a statue below.

Retrieved from "https://imagecomics.fandom.com/wiki/Spawn_Vol_1_92?oldid=68161"
Community content is available under CC-BY-SA unless otherwise noted.