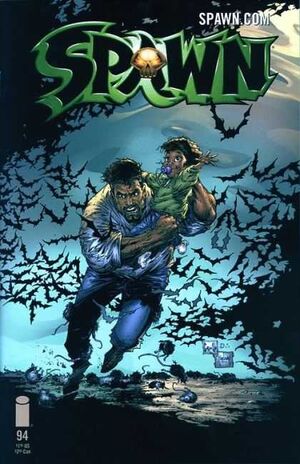 Appearing in "The Children's Hour"

Plot Synopsis for "The Children's Hour"

Cyan Fitzgerald visits a children's psychologist for all the tantrums she's had recently. She draws a picture of her friend and tells the psychologist it is her friend that protects him. The psychologist heads outside to speak with Wanda Blake. She tells her she would like to see Cyan again and thinks there is something going on with her.

At their home in Queens, New York, Wanda and Terry Fitzgerald watch Cyan play. Terry gets upset they are wasting money on a psychologist. He takes off in his car after a brief argument. Wanda puts Cyan to bed.

Cyan wakes up and finds Mammon and Violator in her room. She takes off running as they send bats to attack her. Spawn appears and protects Cyan from the bats. He puts her back in her crib. Hearing the noise, Wanda rushes in and finds a branch has smashed through the window. She tries to comfort Cyan telling her it was all just a bad dream.

The next day, Wanda receives a call and is shocked. She pulls Terry into the room and tells him that she's pregnant.

Retrieved from "https://imagecomics.fandom.com/wiki/Spawn_Vol_1_94?oldid=59727"
Community content is available under CC-BY-SA unless otherwise noted.