"Cracks in The Foundation" 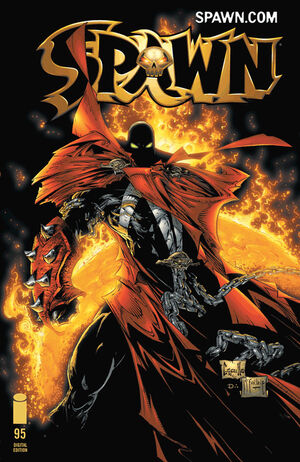 Appearing in "Cracks in The Foundation"

Plot Synopsis for "Cracks in The Foundation"

In Pennsylvania, two men drive a stolen car with a dead body in the back seat. Spawn appears in the road, causing them to swerve and crash. The men die but suddenly have markings appear all over their bodies. They wake up and start walking to town as they speak in a different voice.

Terry Fitzgerald yells at Wanda Blake asking if he should believe she wasn't unfaithful. They haven't been intimate in a while and to suddenly get pregnant is too religious for him. Granny Blake takes Cyan outside while they argue.

At a truck stop, the two victims talk about how the world has changed since the last time they were there many years ago. They mention their plan is to end the world. They talk about needing to last low in order to raise Urizen, as Spawn killed the English folk that tried earlier.[1] When enough people walk into the building to make a total of 13 people, Ab and Zab kill them all and light their bodies on fire. Urizen appears in their smoke plume.

Spawn visits his grave and sees a vision of his mortal self once more. The vision warns him things are going to get worse. Spawn senses an evil presence and rushes to the hill where he finds Urizen.

Retrieved from "https://imagecomics.fandom.com/wiki/Spawn_Vol_1_95?oldid=68162"
Community content is available under CC-BY-SA unless otherwise noted.