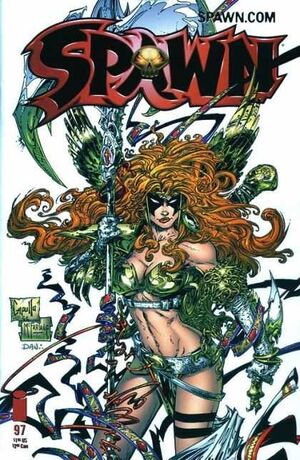 As Spawn is encased in vegetation, he hears the voice of Greenworld talking to him about the destruction the war between Heaven and Hell will cause. It tells him they are giving him a gift as he leaves. Suddenly the pole is removed from Spawn and he wakes up to Angela standing over him. She proposes they work together against the forces moving.

Ab and Zab remain tied up in a warehouse by Angela's Angelic Ribbons. They discuss how they shouldn't have told her what they were up to.

As Urizen moves through Malice, Pennsylvania, locals are influence to murder and kill each other. Including mom's stabbing their children to death in their sleep as they move in a hypnotic trance towards Urizen.

In the Aether, the Angels move to fight back against Urizen. However, Mnemosyne suddenly receives a command from the Council that they are ordered to stand down and let the beast roam free on Earth.

In Nova Scotia, Spawn and Angela find Cogliostro. They ask him how to defeat Urizen. Cog informs them he cannot be destroyed, he can only be contained. He is older than memory and no one knows how William Blake the author knows about him, but most of his writers were correct, he devours souls and negates spiritual energy. Angela then asks him about Abbadon and Zabraxas, she wants to know who would have sent them. Cog says he doesn't know, they are minor demons that can open gates between worlds. They are free for hires and could have been hired by anyone who wanted to Armageddon war to happen sooner than later. As the two walk out, Spawn becomes agitated and attempts to leave. Angela kisses him as a surprise, and tells him he needs to take a step back and think about what he has become.

In the Aether, Domina appears. She tells her she's confirmed the orders are correct from the Throne, but they must proceed forward with the attack anyways. Urania claims what she proposes is hearsay.

Retrieved from "https://imagecomics.fandom.com/wiki/Spawn_Vol_1_97?oldid=61070"
Community content is available under CC-BY-SA unless otherwise noted.