"The Edge of Darkness" 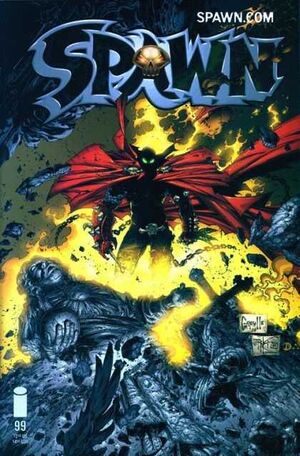 Appearing in "The Edge of Darkness"

Plot Synopsis for "The Edge of Darkness"

Angela pushes back the hoard of Angels looking to head to Earth to fight Urizen. She pleads that they will only incite a war with Hell but they don't listen. Angela is forced to fight her Angelic sisters in combat.

Spawn confronts Urizen and finds his power is too great.

In Queens, New York, Granny Blake sits with Cyan Fitzgerald. Cyan tells her that she thinks it isn't a dream, and the bad men are going to hurt the sad man. Granny tells her to give him her strength by praying for him. Meanwhile, Terry Fitzgerald helps Wanda Blake through the pregnancy by supporting her as he's grows concerned.

In the Aether, the Heavenly Hosts arrive and reiterate the command is to stand down to the rogue Angels attempting to head to Earth. Angela, thanks them and then teleports back to help Spawn.

Spawn suddenly becomes more powerful as someone is lending him additional power. Plants from the earth and elements surround Urizen. He's pulled back down into the bowels of the earth as Angela uses her Dimensional Lance to continue pushing him down. Ab and Zab announce that they are impressed with Spawn's actions. Spawn threatens them that he'll do what he did to Urizen to them if they don't tell him who ordered them to unleash Urizen. They admit it was Malebolgia.

Retrieved from "https://imagecomics.fandom.com/wiki/Spawn_Vol_1_99?oldid=53947"
Community content is available under CC-BY-SA unless otherwise noted.