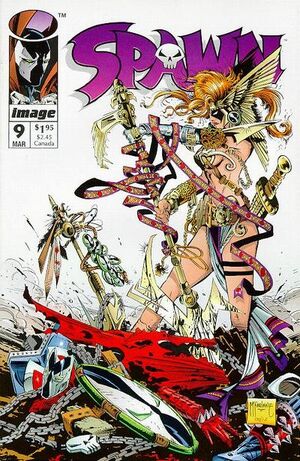 I'm looking almost the same as the last time you saw me. When you described me as a pasty-faced, runty little desk-bound bureaucrat obsessed with tiny details and no prospects of promotion

800 years ago in a journal entry, Angela reads about Hellspawn and Heaven's goal of exterminating them. She reads about the rules specified are only for Hellspawn in Living Realms, and those in Beyond Realms are not to be touched unless an official declaration of war is made with Hell.

The entry explains the best way to kill a Hellspawn is when it is still new and unadjusted to it's carapace. That is when they are cronally confused, and new at using their powers. Because of this, they are also brash and use way too much power as opposed to a more experience Hellspawn. For this reason, while they are most vulnerable as a new Hellspawn, they are also potentially more dangerous or unpredictable. The journal explains that these Hellspawn sent to Earth, usually once every 100 years, and no more than one at a time, are potential officers in Malebolgia's future war. The Living Realm acts as a trial to see if they are fit to lead. The best way to kill them, is a surprise attack, but beware their suit, or carapace, as they are equally wiley in their younger years.

Angela recalls posing as a young woman in distress in the 12th century. When Medieval Spawn, a new hellspawn at the time spots her, She asks him to take her to a remote location to save her sister from an ogre. Angela recalls reading how new Hellspawn are drawn to help people when they are first reborn. In the cave, she surprises him from behind and strikes him with her Dimensional Lance to kill him.

In the present day, Spawn speaks with a Count Cogliostro who not only knows his name, but knows about Hell and how it operates. Cogliostro requests Spawn to summon beer as a training and reward exercise and he does.

Angela appears at work, where she meets Gabrielle who informs her Raphaela has left her in charge of this world. Angela shows little regard for her talking down on her for being a freelancer and reveals she has a hunting permit. Gabrielle admits she can't stop her from hunting but she requests it to be quick and clean.

Later, as Spawn and Cogliostro continue their discussion, Angela appears behind them. As she attacks, Spawn disappears in a pool. Angela, undeterred, follows in but is shot back to heaven when she realizes she is overpowered. Spawn picks up the lance left behind as Cogliostro urgently warns him to stop. As Spawn presses a button, he disappears in a while light and his Necroplasm is reset to 0000. Cogliostro mourns he was a good kid, just not very bright.

Retrieved from "https://imagecomics.fandom.com/wiki/Spawn_Vol_1_9?oldid=43761"
Community content is available under CC-BY-SA unless otherwise noted.