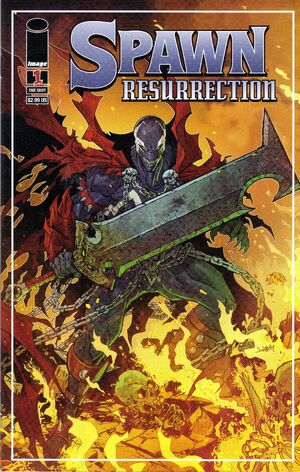 I killed myself because it was time. Nothing was going to change, so I changed things!

In Limbo, Albert Simmons is pinned to a crucifixion cross. God appears before him in the form of a dog he had when he was 9. God tells him about how he created the Universe. He explains in the beginning, he created man because a perfect world had no meaning. He then erased his memory of how mankind's story would end.

On Earth, militants and roots erupt across the world.

God explains he purged the world with a flood once, but it didn't work. Demons continued to live on earth and they will continue to haunt Al as long as he's there. They chase Al because he has free-will and can change his fate. God then shows how Wanda Blake dies. She is caught in a mob at the wrong time, and her car is set on fire, killing her and her unborn child.

Al lashes out in anger at God. He doesn't understand why he didn't help her. God explains when she died she went to Hell to save their unborn child. He explains he is currently protecting her soul in Hell, but he can't go there. He sends Al to help in his stead. He gives him his Sword of the Spirit and hopes Al makes the right choice of his own free will.

Retrieved from "https://imagecomics.fandom.com/wiki/Spawn_Vol_1_Resurrection?oldid=68196"
Community content is available under CC-BY-SA unless otherwise noted.