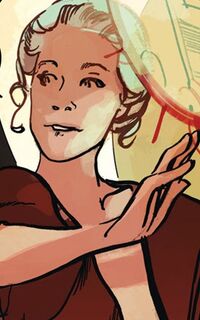 Stel Caine is a strong mother who will go to great lengths to fight for her family and is an endless optimist. While her planet dies, she continues to research probes sent to other worlds in search of an inhabitable world they could escape to.

Years ago while pregnant with her first son Marik, Stel became concerned about his future in a bleak and dying world. She joined the church of Quantumolgy, a group dedicated to endless optimism. Their leader, Masaje, told her that Quantumolgy had kept the people alive for a millennium and that her son's future relied on her faith.[1]

Stel was hesitant about training her two daughters how to hunt and manage a Helm Suit, but her husband, Johl, insisted it was the future of their town in Salus. While they were out hunting, their Subx was attacked by Scurvies. The pirate leader stole Johl's eye due to the Helm Suits being DNA optically encoded. The leader then scuttled their ship while taking their two daughters.[2] As Johl died in her arms, he asked her to go with him. Stel and her eternal optimism refused as she still had Marik to take care of.[3]

10 years later, Stel morns the loss of her husband and daughters. He son Marik has resorted to drugs and been arrested for murder. She returns to see her spiritual guide Masaje. She was advised that her optimism wasn't why she was in a bad spot with her family dying, but it was her fear that was holding her back.

She returned home and received word that one of her probes had potentially found an inhabitable world.[3] She then headed to the capital where she struck a deal with Senator Greeme to free Marik from prison and allow him to assist her in checking the probe that landed on the surface.

She dragged Marik along on the journey. He resisted and doubted her vision but when he was about to run out of oxygen and she found a ride on see creatures to save them, he began to see the ways of his mother's eternal optimism.[4]

They finally arrived in Poluma. The found the town was a cesspool of illegal gambeling and safe-haven for pirates. They spotted Roln and Stel become obsessed with gaining revenge for losing her daughters. They found Tajo was still in his service and had become brainwashed in following him. Stel was quickly taken captive when she attempted to attack him but found his body was made of Iron and her attacks were futile.[5]

Escape from Poluma and Slavery

Four months later, Stel was tortured and forced into slavery. She refused to tell Roln the location of the probe. She was brought to the coliseum tank to watch him have her son, Marik, killed along with Tajo watching in his service. Stel attacked Tajo and Tajo threw her Truth Shell into the coliseum tank.[6] During the scuffle, they witnessed Marik die as he used his last lance to save Tajo from being harmed. This fueled Tajo's rage to enter the Helm Suit and destroy the city. She put Stel in a subx and left to search for Della while Stel was sent to search for the prob with Mertali and Zem, two coliseum warriors that fought with Marik.[7]

Stel continued her journey towards surface to find the probe but began to lose her faith. She began to wonder why she joined Quantumolgy and how it's only brought her pain. She was encouraged by Zem and Mertali to keep going. They arrived at a city, Misalt. It had been long abandoned due to radiation. They explored it for resources so that they could continue their journey as they began to run low on supplies. Stel stumbled upon a mer-woman who coddled her baby. The conversation soon turned sour when the woman turned to attack her.[1] As Stel escaped, she continued to question her resolve to push forward. She had a vision of how she's always lived her life for others. For Johl, for Marik, for her kids. She realized she needed to start living for herself if she were to ever reach the surface. She broke out of a hypnotic trance she had been placed in by the mer-people and escaped with Mertali. Zem attempted to sacrifice himself in a form of martyrism for his sins. However, Stel refused to give up on him and came back for him with their ship. They escaped and continued on their journey with new supplies to head to the surface and find the landed probe.[8]

Retrieved from "https://imagecomics.fandom.com/wiki/Stel_Caine_(Low)?oldid=46806"
Community content is available under CC-BY-SA unless otherwise noted.