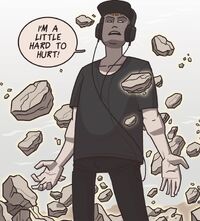 Stephen is a reincarnation of Saint Stephen.[1]

Stephen went to a local diner where he was tracked by Sebastian, Blaise, and Lucy. When Sebastian yelled out his name, Stephen ran out of the diner. When they caught up with him, he was told they didn't want to hurt him, though he told them he was told that before. He then levitated rocks from the ground and told them he was hard to hurt.[1] Stephen threw Sebastian in the air by lifting the ground beneath him. When Sebastian fried arrows, Stephen blocked them all. Stephen then lifted the car behind Blaise and nearly crushed him before the latter was saved by Lucy. When Blaise begged Jesus Pimp to make Stephen choke to death, Stephen began coughing and fell to the ground, leaving him unconscious. Stephen was then taken away by the three.[2]

While stopping at a gas station in New Mexico, the four Saints were ambushed by Michael's followers.[2]

Retrieved from "https://imagecomics.fandom.com/wiki/Stephen_(Saints)?oldid=53310"
Community content is available under CC-BY-SA unless otherwise noted.