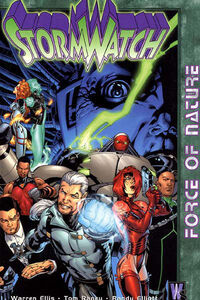 Base of Operations
Skywatch
Affiliations
Origin

Stormwatch is a United Nations-sponsored superhero team in the Wildstorm Universe. Stormwatch was created by Jim Lee in 1993. There have been several incarnations of Stormwatch with varying rosters, resources, and manifests.

Stormwatch began in the comic book Stormwatch, published by Image Comics but owned by Jim Lee. Among the main early writers of Stormwatch vol. 1 were Jim Lee, Brandon Choi, H. K. Proger, and Ron Marz; among the main early artists were Scott Clark, Brett Booth, Matt Broome, and Renato Arlem. The Stormwatch team was run by the United Nations, and overseen from a satellite by their director, "the Weatherman". The Weatherman was one Henry Bendix, who had cybernetic implants connected to his brain to better monitor various world situations and his Stormwatch teams in action. His field commander was Jackson King, aka Battalion. Other members included a young American woman (the pyrokinetic, Fahrenheit), an Irish police officer (the energy being Hellstrike), and an ex-Russian Spetznaz officer (the super-strong and durable Winter), a young Japanese man (Fuji, another energy being trapped in a large, super-strong containment suit), and a young Italian woman (Diva, with sonic powers).

Later, Ron Marz, who had worked previously on Marvel Comics' Silver Surfer title and had developed Hal Jordan's Green Lantern replacement Kyle Rayner at DC Comics, took on the writing chores. Concurrently, James Robinson of DC's Starman fame was writing WildC.A.T.s. Robinson and Marz, under the editorial direction of Jim Lee, intertwined the storylines of the two books over the course of several months.

Also around this time, two two-issue miniseries were released, Stormwatch Team One (written by James Robinson) and WildC.A.T.s Team One (written by Steven Seagle). These two miniseries were also entertwined, and revealed that the groundwork for both teams had been laid by a core group in the mid 1960s, consisting of Saul Baxter (Lord Emp), Zealot, Majestic, John Colt (the template for Spartan), Backlash, a young Henry Bendix and Jackson King's father Isaiah, all of whom would be members of, or would figure prominently in the later Stormwatch and WildC.A.T.s teams. In this series, the term WildStorm, the publishing imprint's codename, was defined as a code term used by the United States Government, "Wild" referring to extra-terrestrial life forms and "Storm" referring to invading forces.

Warren Ellis' version of Stormwatch was heavily influenced by DC's Vertigo line and it's notable authors, such as Alan Moore, Grant Morrison and Garth Ennis. Ellis injected more sexual and horror elements, thinly disguised political commentary, and criticisms of the United States government into the stories. The art was toned down from the more exagerrated '90's style which had dominated all of the early Image Comics, allowing readers to take the book more seriously. It was during this period that Ellis used Stormwatch to introduce the concept of the Bleed, a space between parallel universes which features heavily in Planetary and other comics set in the Wildstorm Universe. By the end of volume one, Ellis had revised Henry Bendix as a manipulative villain, much as Grant Morrison did with the character of "The Chief" in his run on DC's Doom Patrol.

Ellis continued to write the book as it transitioned into Stormwatch volume 2, until the WildC.A.T.s/Aliens crossover of August 1998 — also written by Ellis — saw the Stormwatch team all but massacred by Xenomorphs, the creatures from Alien. Conveniently, almost all of the Stormwatch characters Ellis had not created were killed off in this story. Those characters who were Ellis's creations, including Jenny Sparks, Swift, Jack Hawksmoor, Apollo, and the Midnighter, comprised a new group, The Authority, and what few survivors from the original team (only Jackson King and Christine Trelane, and Flint) were moved to a different book, The Monarchy. Stormwatch volume 2 ended immediately after this.

Ellis's pivotal work on Stormwatch is collected in the following trade paperbacks:

A major theme of the series was the non-superpowered team leader's distrust of superpowered beings, and of necessity Team Achilles took a detailed and pragmatic approach to superpowers, showing how it was possible to use intelligence and tactics to overcome physically superior foes such as Team Achilles often faced. The Authority were more than once brought low during the series' run. The series later became a satire of politics and comic books, with segments where the team replaces a Strom Thurmond/Jesse Helms-like Senator with a shape-shifter, and a storyline where a Captain America-analog (revealed to be the reincarnation of George Washington) tries to overthrow the American government.

Wright was fired after it was revealed that he had lied about being a US Army Ranger, with the result that Team Achilles was abruptly cancelled with issue #23 (August 2004), in the middle of a storyline. The planned final issue, #24, was never published, though the finished script is available online. [1]

Stormwatch is one of several comic books to have been restarted following Wildstorm Comics' Worldstorm event. Starting in November 2006 [2], Stormwatch: Post Human Division is written by Christos Gage with Doug Mahnke handling the pencils.

Several dead characters are back for this series, thanks to the events of Captain Atom: Armageddon, in which the Wildstorm universe underwent a "soft reboot" with minor changes in continuity. In this new series, Stormwatch has been reconstituted as the UN's superteam, but a branch office has been set up in New York. Entitled Stormwatch: P.H.D. (Post Human Division), they are underfunded and overworked, their mission is to find "cost-effective" methods of saving the day. The series follows the branch office as their leader, former Weatherman Jackson King, tries to defeat superhuman menaces and balance the tight budget. The team consists of King, NYPD officer John Doran, a depowered Fahrenheit, a former Stormforce soldier codenamed Paris, a master manipulator and former moll to supervillains called Gorgeous, a former sorcerer's apprentice named Black Betty, a shape-shifting ex-supervillain and forensics expert named Dr. Mordecai Shaw a.k.a the Monstrosity, and an ex-supervillain and technology expert called the Machinist.

After the loss of most of the team, Stormwatch is restructured with new recruits prior to issue #1. Backlash is transferred to head of training. 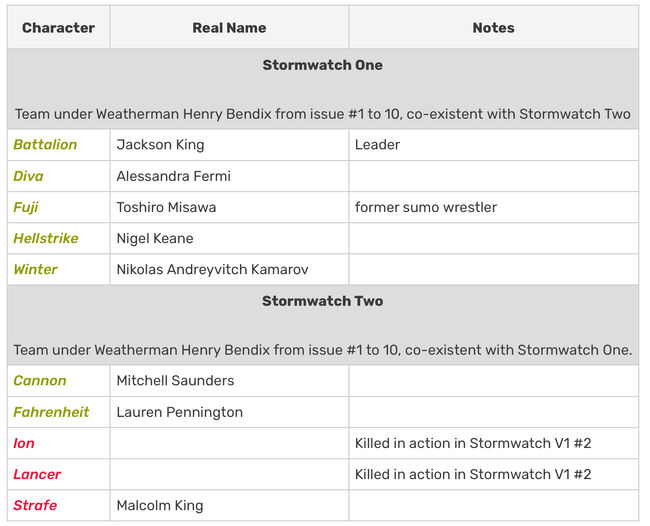 Henry Bendix was stripped of his position in issue #11; replacing him is his second-in-command Synergy, aka Christine Trelane. Team assignments are variable from this point on, grouping operatives and assigning command as situations dictate. 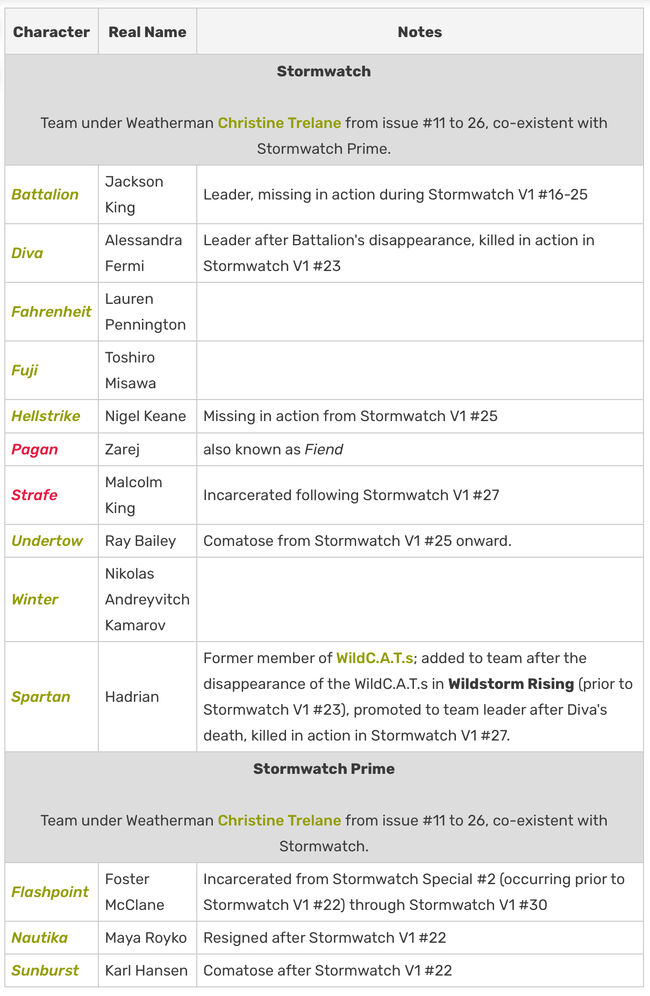 Issue #27 till Fire From Heaven

The team was rebuilt after the defeat of Despot (issue #27) and Henry Bendix was again Weatherman, with Synergy as his second. 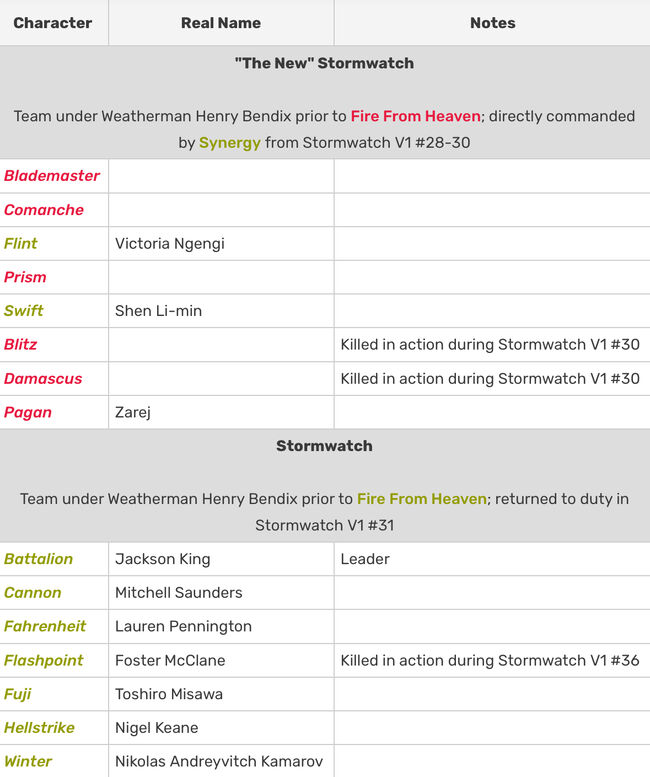 After Fire From Heaven

After the Fire From Heaven crossover, a major restructuring of Stormwatch occurred in Warren Ellis' first issue. Battalion was transferred to head of training, and Synergy to head of recruitment. Molly Perkins was transferred from Stormforce to the Analysis Deck of Skywatch. Sunburst & Nautica were dismissed from active Stormwatch service and hired as Earth-based analysts for Skywatch. Blademaster, Cannon, Comanche, Pagan, Prism and Undertow were dismissed, with lifetime U.N.-provided salary and accommodations. Undertow is killed soon after. 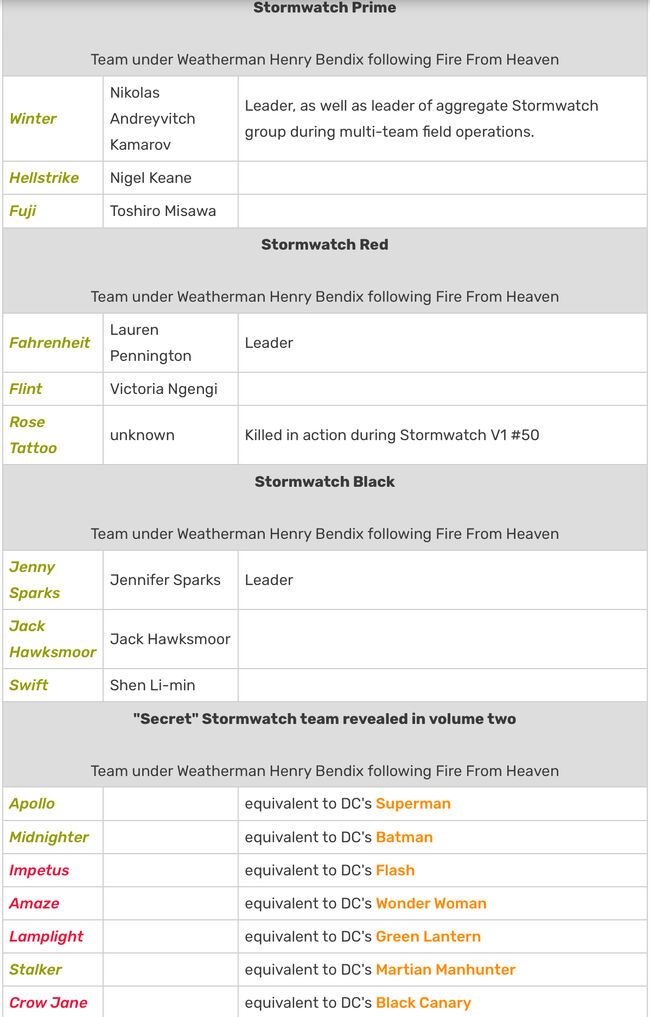 After "Change Or Die"

After the "Change Or Die" storyline, Henry Bendix was missing and presumed dead. Jackson King became Weatherman, and Molly Perkins became head of analysis. The Stormwatch field teams were restructured, and Stormwatch Black officially dissolved (but retained in secret). 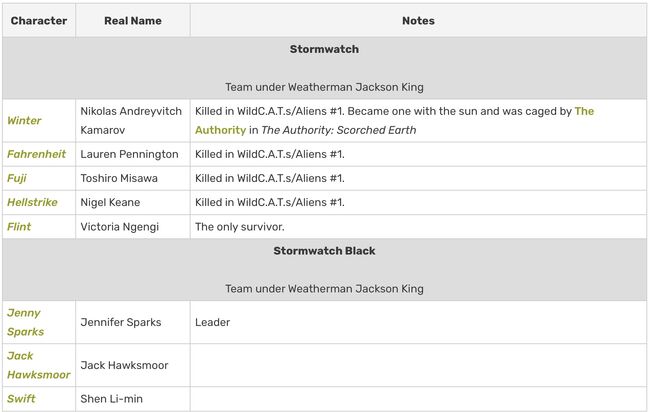 After Skywatch is destroyed in WildC.A.T.s/Aliens #1, Stormwatch is dissolved. Stormwatch Black becomes The Authority at the end of the series, with the addition of former 'Secret' Stormwatch members Midnighter & Apollo as well as The Doctor II and The Engineer II)

In the "Bleed" storyline (Stormwatch V2 #7-9), our universe's Stormwatch watched events unfold in a parallel universe that had little to no knowledge of seedlings, Daemonites, or Kherubim. In this universe, Battalion had been removed from Stormwatch after a catastrophic attack on the Skywatch space station. He was replaced as Weatherman One by Jack Hawksmoor, with Synergy retaining her position as second-in-command. His bodyguard and personal assistant was Freefall (of Gen¹³), going by her real name, Roxanne. His maid at his home in the United States was Anna, also of Gen¹³. He commanded a version of Stormwatch employing over twenty-three super-powered beings; besides himself, Freefall and Synergy, there were exactly twenty field operatives, divided into five teams.

Other Characters Appearing in Stormwatch

In the series Planetary, John Stone is a secret agent working for the agency known as S.T.O.R.M. in the 1960s. Its command center is known as S.T.O.R.M. Watch. As Planetary is written by former Stormwatch writer Warren Ellis and set in the same fictional universe, it is very unlikely that the similar names are a coincidence and S.T.O.R.M. is probably a precursor to Stormwatch. Indeed, in Planetary #11, John Stone takes Elijah Snow to a remote, little-known bar in Kazakhstan called "The Last Shot" - this is the same bar that Winter bring his Stormwatch teammates to in Stormwatch #46, during Ellis' time writing the series.

This list is incomplete; you can help by expanding it.