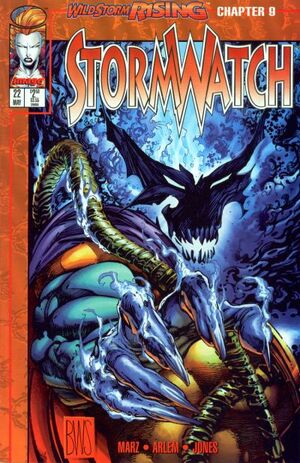 The final battle is at hand, StormWatch, led by Diva, engage the oncoming threat of Daemonite forces led by Helspont. The battle is joined in Nicaragua, on the outskirts of any civilized location. The StormWatch team fights valiantly but futilely against the overwhelming power of Helspont and the vast numbers of his army. While StormWatch is in battle with Helspont, Synergy gives her report to the U.N. Executive Council. Having heard the strong possibility of StormWatching failing, the Council encourages Synergy to consider releasing the all-powerful but highly unstable superhuman force feared by all as the Warguard. Synergy expresses her reluctance to following through with such an option. The Council leaves it as an open avenue and dismiss Synergy. The team indeed fails to subdue Lord Helspont as he moved on closer to his prime objective, the Dreadnaught spacecraft, the tool that will provide him with enough firepower to obliterate all life on earth.

Meanwhile, Lord Defile, ultimate rival of Helspont plots out his next move. Simply following Helspont's lead, Defile orders his closest agent White, the shapeshifter, to prepare for their move on taking Helspont's keys. Quickly moving on to other events, Synergy relays the news to Henry Bendix, of the U.N. Council's decision to release the Warguard. Synergy and Bendix exchange their thoughts of the foolishness of the Council's decision. Synergy informs him that it has been finalized and she simply wanted to talk about it, hoping that after all is done, there will still be a world left. Moments later, Lincoln "Link" Adams, Skywatch's chief engineer, leads a team of security officers to release the Warguard. Despot, assuming his leadership of the Warguard, listens briefly to the instructions of Link, saying they are ordered to defeat Helspont, in exchange for leniency. Despot and his Warguard refuse this offer and Despot promptly kills all guards except Link. He leaves Link with a message to deliver to the Council about his Warguard's newly obtained freedom and their refusal to be servants to anyone.

Back in Central America, StormWatch regroups as Diva received word about Despot's actions. Strafe stresses out at first, concerned more about his father Despot than the team's mission. Diva manages to get Strafe refocused on the mission, explaining that Despot is not the immediate concern and will not ever be, should Helspont gain control of the Dreadnaught. The team moves out, heading towards the crash site with the hope of beating Helspont there. At the crash site, Union, Savant, and Mr. Majestic scour the ruins of a temple for any signs of the Dreadnaught. Savant stumbles across a part of the ship just under a thin layer of dirt. With Union's powers, the ship is quickly unearthed. By this time, Helspont has arrived. Teams Wetworks and WildC.A.T.s. also arrived in time with StormWatch. While they may have rather fought amongst themselves, they are soon struck by awe at the sight of the mighty spacecraft now in full view. As it turns out, it was not a Daemonite spaceship but a Kherubim spaceship.

This issue follows the events of Backlash Vol 1 8.

Retrieved from "https://imagecomics.fandom.com/wiki/StormWatch_Vol_1_22?oldid=63757"
Community content is available under CC-BY-SA unless otherwise noted.