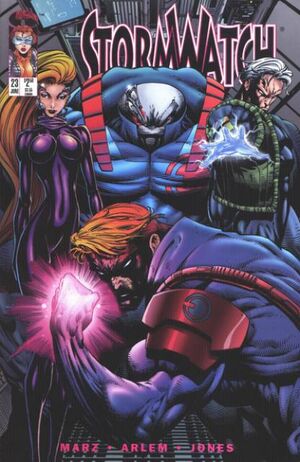 In the aftermath of the events of the Wildstorm Rising saga, StormWatch returns its focus to an even bigger threat: Despot, the leader of the Warguard. After his ill-timed release[1], Despot declared he and his Warguard were to remain permanently free.

In preparation for the obvious mission to recapture Despot and the Warguard, StormWatch takes the remains of the downed Spartan and with Link's help, restores him to active duty condition. Synergy quickly enlists him to serve with the team, despite objections from Strafe. The following mission is to apprehend Despot and his followers on a Moon base that they took control of. However, Despot has designed an ambush led by his field commander Judgment. During the attack, Despot turns Strafe to his side, betraying StormWatch. Spartan notes this as a vital and fatal shift in power as Strafe attacks Synergy and other former teammates including Hellstrike who suffers a containment breach in his suit. Diva orders Winter to lead the team to safety while she holds off Despot. However, Diva is easily dispatched by Despot in her brave attempt. The tide changes when Spartan finally steps forward to take command of the remaining StormWatch members.

Retrieved from "https://imagecomics.fandom.com/wiki/StormWatch_Vol_1_23?oldid=69204"
Community content is available under CC-BY-SA unless otherwise noted.