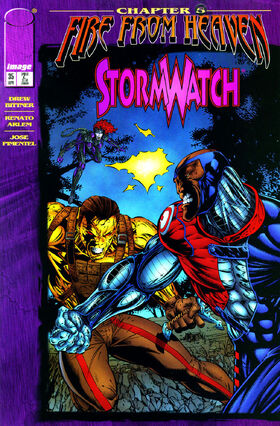 Appearing in "Fire From Heaven, Chapter 5 of 14"

Plot Synopsis for "Fire From Heaven, Chapter 5 of 14"

On the Moon, an army of alien mercenaries working for Damocles moving an enormous cannon into position. Nearby, in Tranquility Base, the Bounty Hunters and the Sword of Damocles attack and secure the station. The cannon crew reports that the weapon is in place and charging, and the Sword orders everyone to begin phase three of their plan.

Back on Earth, Dane and Taboo confront Battalion, who wants to arrest them. They fight, and Battalion is surprised to learn that Dane has psychic powers (from the Gen-Factor) as well. Eventually, Battalion subdues them and brings them in. He contacts Cannon, Flashpoint, and Fahrenheit and tells them to regroup at base since they lost their quarry in the earthquake.

As Battalion and his prisoners fly back to headquarters, Backlash and Cybernary emerge from hiding. Cybernary explains that she is fighting against Kaizen Gamorra's reign, and she wants Backlash to help her in return for her saving his life during the earthquake. A cyborg appears and Backlash is about to attack him, assuming he's a Hunter-Killer, when Cybernary stops him and tells him that the man is one of her scouts. Backlash agrees and they head to Cybernary's hideout.

Elsewhere on the island, Burnout and Crimson along with their prisoner Aries are trudging through the jungle. They reach the hidden lab that everyone has been looking for and find a bunch of dead Hunter-Killers outside. Aries is surprised at this, but quickly regains his cocky attitude and says that the internal base defenses will deal with his captors easily enough.

Meanwhile, on Skywatch II, a party is being held for the official opening of the new space station. Weatherman One is unable to relax because of the Gamorran crisis and Synergy tries to comfort him, saying that Battalion can handle things just fine. But then the Skywatch crew detects an energy spike coming from the Moon. We see that the energy is actually the huge cannon being fired on the orders of the Sword of Damocles. Bendix orders that the shields be raised, but it's too late -- the blast rips into Skywatch II. As Weatherman One begins to assess the damage, he says that Battalion and the team on Earth are on their own for now.

In Skeen's Tavern, Gamorra City, Flashpoint orders another beer when Brutus of The Mercs shows up, determined to get revenge for Flashpoint's murder of his teammate Kilgore. They fight, tearing up the bar, and then Flashpoint burns Brutus' hand clean off with his eyebeams. As Brutus falls to the ground, Razer (also of the Mercs) shows up. They kiss, and then Flashpoint tells her to let "the boss" know that he's got to talk to him.

At the Stormwatch base camp on Gamorra, Battalion, Cannon, and Fahrenheit worry about the loss of communications to Skywatch, and Cannon complains that this mission stinks. We learn that Winter survived the attack by the Sword of Damocles, but he's unconscious and in critical condition. Fahrenheit and Cannon don't feel right about protecting Kaizen Gamorra, but Battalion is determined to follow orders.

In a prison yard, Taboo watches over Dane who is semi-conscious and seemingly babbling nonsense. Taboo wishes that he were actually talking to someone because it would make her feel better. We then learn that he actually was talking to the rest of his Wetworks team, who have just arrived in Gamorra and are moving to his location.