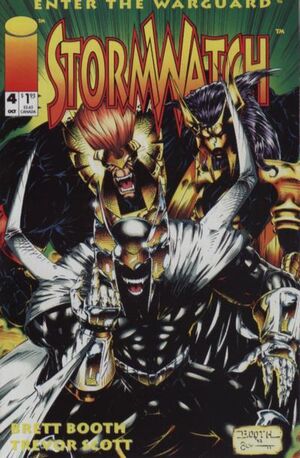 Cannon and Malcolm King, now codenamed Strafe, train with Backlash while Battalion observes. Arrogant and hotheaded, Cannon picks a fight with Backlash and gets his ass kicked.  Meanwhile, a Skywatch shuttle crew investigates the remnants of a derelict spacecraft in orbit only to be ambushed by the Daemonites within. Hours later, they return to Skywatch possessed by the aliens.  In the dining area, Backlash tries to talk to his girlfriend, Diane LaSalle, about their relationship but is interrupted by Fuji, Diva, and Winter.  LaSalle returns to work soon thereafter where the Daemonites attack her.  She manages to sound the alarm before one of them possesses her.  Battalion assembles Stormwatch One and investigates with Backlash and Cannon.  They track LaSalle and the remaining shuttle crew to the cryo-lab where the Warguard are held in stasis.  S’Yrn, the Daemonite possessing LaSalle, uses her credentials to awaken three of the Warguard:  Hexon, Nychus, and Talos.  Stormwatch arrives unaware the Daemonites have possessed the Warguard.

Retrieved from "https://imagecomics.fandom.com/wiki/StormWatch_Vol_1_4?oldid=70824"
Community content is available under CC-BY-SA unless otherwise noted.