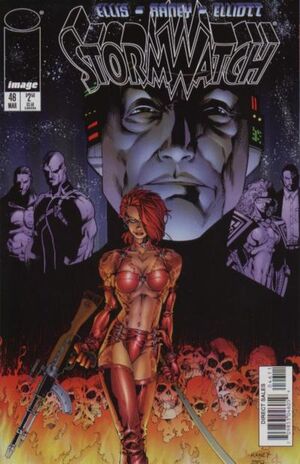 Winter and several of the other Stormwatch officers go on a worldwide bar crawl, using Skywatch's transfer bays. Bendix discovers that a mysterious superhuman he's been tracking has vanished. Rose Tattoo abducts and abuses a Stormforce guard; Bendix discusses the superhuman's disappearance with her, and they both seem to know who he is. Bendix makes an entry in his diary, stating that Stormwatch is now ready for use in his plans. The Stormwatch officers finish the day on a tropical island, discussing how it's difficult to take time off from being a superhero.

Retrieved from "https://imagecomics.fandom.com/wiki/StormWatch_Vol_1_46?oldid=53658"
Community content is available under CC-BY-SA unless otherwise noted.