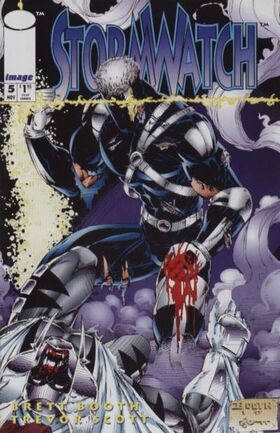 Stormwatch battles the Warguard not realizing they and Diane LaSalle are possessed by Daemonites.  In the course of the fight, S’Yrn shoots out a viewport, sucking Backlash, Hexon, and Nychus out into space.  S’Yrn flees while Fuji tears up a piece of floor and uses it to plug the breach. Battalion and Winter subdue the possessed Talos.  S’yrn hijacks a shuttle and leaves Skywatch.  Weatherman One orders it held with a tractor beam, and S’Yrn retaliates by firing its weapons on the station.  Backlash makes it onto the shuttle and uses his powers to inflict enough pain on S’Yrn to separate him from LaSalle.  But, S’Yrn then chokes him out.  Backlash wakes up in the infirmary and learns to his horror that LaSalle is in a coma.