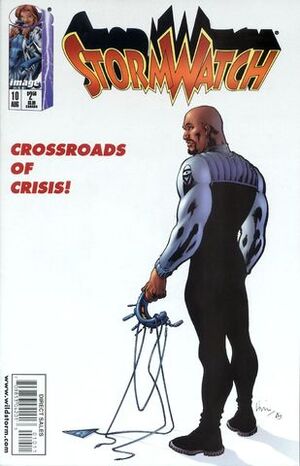 Appearing in "No Reason"

Plot Synopsis for "No Reason"

An asteroid approaches and is going to pass very close to Earth, so science officer Molly Perkins requests permission from Weatherman King to send a team to set charges and blow it off course into the sun. Weatherman blows her off and approves the mission as he is busy with Winter chewing him out for his failure to do more in service of the parallel Earth they discovered, declaring that there is no more reason for the team to exist if they start picking and choosing which lives they save. Weatherman punches him and kicks him out of his office.

His words linger, however, as Weatherman and Synergy walk together and talk about the pressures of being Weatherman, that fine line you walk between saving the world and controlling it. He also remembers the Jackson King of that world, destroyed in both body and spirit from destroying half of SkyWatch trying to save the other half.

Meanwhile, the science team approaches the asteroid and realizes it’s not merely an asteroid, but a vessel. Molly notifies Weatherman and directs the team to set the charges and leave as quickly as possible, the eerie similarities to what they just witnessed on the parallel Earth giving her an ominous feeling about the whole thing.

As Weatherman reaches the science deck, communications with the team on the asteroid are lost. One of the team’s shuttles is able to make it off before the charges explode, but the other shuttle and crew onboard are not so lucky. The members of StormWatch spend their evening oblivious to the trouble: Hellstrike and Fahrenheit having fun in bed, Flint comforting Winter over a drink and Fuji gazing out at the stars. The surviving shuttle continues on its path back to SkyWatch.

Retrieved from "https://imagecomics.fandom.com/wiki/StormWatch_Vol_2_10?oldid=28117"
Community content is available under CC-BY-SA unless otherwise noted.