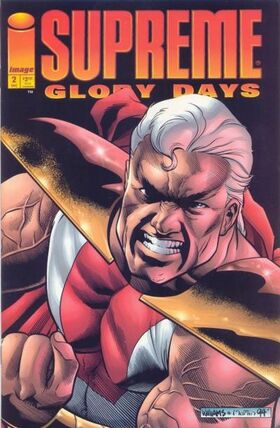 Frail and wheelchair bound, the resurrected Baron learns he needs the genes of a superhero to be restored to full health.  He identifies Glory as an ideal donor.  In Manhattan, Glory is surveying the mess she made during Supreme’s visit when Nazis swarm her apartment and take her captive.  Later, Diehard and SuperPatriot find Supreme sulking atop Mount Rushmore and inform him of Glory’s abduction.  They have tracked her to the Baron’s submarine base in the Pacific Ocean where Roman is waiting to join them.  As they approach the Nazi sub, the Baron is siphoning Glory’s life force, restoring his youth.  Supreme and the rescue party breach the vessel, quickly fight their way through the Nazis, and stop the process.  The Baron flees in an escape pod, leaving the sub to self-destruct, and Supreme goes after him while the others get Glory back to their ship.  An hour later, she has been restored to health when Supreme returns having been unable to catch the Baron.  Calling the reunited Allies’ mission a success, Diehard asks Supreme if he will work with them again, and Supreme says destiny may bring them together again.