"The Sword of His Justice" 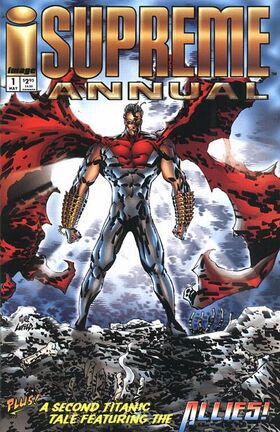 Appearing in "The Sword of His Justice"

Plot Synopsis for "The Sword of His Justice"

Supreme destroys a mining operation on the planet Osiris Rho when it threatens indigenous crystalline lifeforms.  The operation’s owner Chi learns of the incident and hires the shape-shifting assassin Vergessen.  When they meet, Vergessen is so ecstatic to learn his target is Supreme that he tells Chi he will do it for free.  He and Supreme are old enemies.  Vergessen is also from Earth and was a Nazi during World War II.  Supreme seemingly incinerated him, but he survived and escaped into space.  He tracks Supreme to an urban market on the planet Ama-Terasu 7.  Vergessen buys Supreme a drink and challenges him to a fight.  Supreme refuses so Vergessen detonates a bomb in the market, killing hundreds of beings. Infuriated, Supreme attacks, and the two rampage through the city exchanging blows.  Eventually, Supreme punches Vergessen into the ground and flies away.  Vergessen transforms into electricity, enters Supreme’s brain, and forces him to fly into a star.  Supreme emerges unscathed so Vergessen reenters his brain to become the one thing Supreme fears can kill him.  But, because Supreme believes nothing can kill him, Vergessen becomes nothing, inadvertently killing himself.  Supreme deduces that the owner of the mining operation is who hired Vergessen and send Chi a simple warning:  “Soon.”

In 1943, the Allies find Supreme slaughtering Nazis on a battlefield in France.  They have come to recruit him, specifically to help liberate the town of L’Fontaine and cut off a Nazi German supply line. While the Allies clear the town, Supreme attacks a German bomber overhead and steals two of its bombs.  Glory tries to stop him, but he drops the bombs on L’Fontaine himself to eliminate the Nazi force.  Glory and Supreme land in the ruins, and she rails at him over the civilians killed in the blast.  He says he did what he had to do, forcibly kisses her, and flies away.  Her teammates hold her back from attacking him, and SuperPatriot declares they are better off without him.