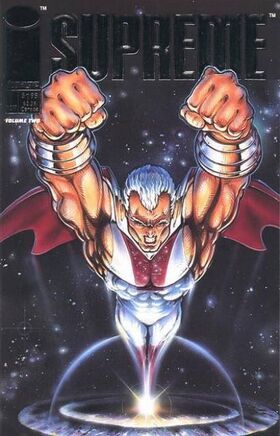 The U.S. government detects Supreme approaching Earth and sends a Youngblood team into orbit to intercept him.  He announces himself, but only Combat knows who Supreme is and refuses to believe it. The team attacks him, and he easily fends them off.  Apologizing for their haste, Sentinel invites him to talk on Earth.  As the media announces his return after nearly 50 years, Supreme and Youngblood meet with top officials in Washington, D.C.  Scientists verify his identity, and Sentinel invites him to join Youngblood, but he just flies away.  Elsewhere, the management of G.A.T.E. International decides to recruit Supreme to lead their team of superhumans, Heavy Mettle.  Supreme returns to Earth orbit and begins to cry.

Infiniti flies through the night sky, demanding answers from Enigma about her amnesia. Distracted by their argument, she inadvertently takes them into orbit and collides with an asteroid.  Enigma vanishes, and Infiniti decides to trust her instincts going forward.  Elsewhere, former CIA director Jedemiah Hagstrom hires the assassin Ripcord to kill a U.S. Senator, Edward Rife, trying to investigate him.