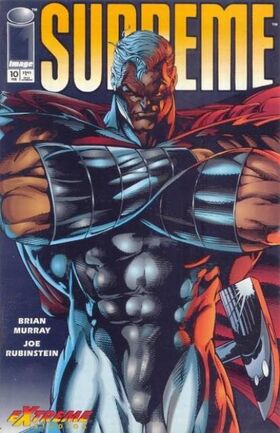 Appearing in "The Interview"

Plot Synopsis for "The Interview"

Having agreed to a live interview with reporter Maxine Winslow, Supreme arrives at D.C. TV station WABC.  Winslow begins by summarizing Supreme’s superhero career during World War II. She then asks Supreme why he left Earth in 1946; he responds that he left to investigate his true purpose.  She questions his actions since his return, specifically his disregard for bystanders in his battles with Khrome and the terrorists at Dulles Airport.  He retorts that he focused on the source of both crises by eliminating the villains. When she asks about his origins, Supreme says he was once human but is now a god.  In the late 1930s, he volunteered for a U.S. government experiment led by scientist Horatio Wells that used a combination of drugs and radiation to transform him into a superhuman.  Supreme says he rapidly became smarter than the scientists and left to explore his powers himself.  Elsewhere in Washington, a government official rages over the phone that Supreme is revealing classified information.  Supreme defends his decision not to join Youngblood and refuses to enumerate his various abilities.  Just as Winslow asks him why he has returned to Earth, the station interrupts the interview with a live report from Arizona where supervillain Quantum is fighting Brigade and Youngblood.  Supreme ends the interview and flies off to confront Quantum.

Black and White watch from a nearby balcony as someone breaks into their high-rise office.