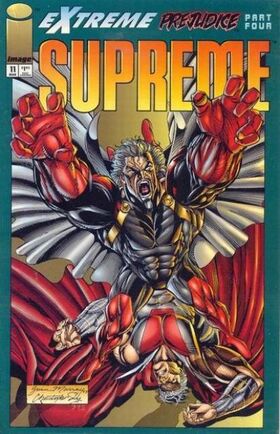 Supreme arrives at Quantum’s former safehouse in Arizona and finds the defeated members of Bloodstrike and Brigade.  Boone warns him of Quantum’s power and says the villain just left with Battlestone and Cabbot.  In the ruins of Brigade’s former headquarters in Malibu, Quantum once again fails to recruit his two sons for his war against humanity.  Supreme arrives and attacks.  He and Quantum battle, both boasting of their might.  In Alaska, David Proctor and his latest recruit, Byrd, visit former New Men member Thomas Runningbear.  Runningbear says he is too old to help against Quantum, but his son Kodiak volunteers.  Elsewhere, the Brotherhood of Man dispatches the Extreme Warrior to find and kill Proctor. Quantum and Supreme’s battle moves into Earth orbit.  Zachariah Grizlock sees Maxine Winslow’s news broadcast on the conflict and rails against Quantum for interfering with his own plans to kill Supreme.  In Malibu, Cabbot has Roam teleport him free of Quantum’s energy restraints, but he loses an arm in the process.  He then flees, leaving Battlestone behind.  In space, Quantum drains energy from Supreme and hurls him toward Earth.  Supreme lands in a remote part of South America and discovers he can no longer fly. Later, at Youngblood headquarters, the members of Bloodstrike, Brigade, and Youngblood watch footage of Supreme’s defeat.  Sentinel concludes they need additional reinforcements just as David Proctor enters with his new team of New Men.

Inside the British embassy, White finds the MI-10 file room and knocks out two of their agents.