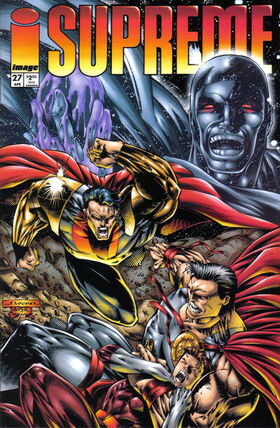 Charles Flanders shows Supreme and Kid Supreme old film footage of his adventures with the original Supreme and the Allies during World War II.  Kid Supreme gets bored, secretly burns part of the film, tells Supreme that his past is irrelevant, and flies off.  He lands at a pay phone to call his parents only to be attacked by Blackheart.  Flanders explains that he got his powers by siphoning them from the original Supreme. When he tries and fails to do that with the current Supreme, Flanders breaks down crying and explains that his whole life revolved around Supreme.  Waiting for Supreme to return from space, he never married or had a family and wrote Supreme comics until he was fired.  The new Supreme says he cannot give Flanders his powers back, and Flanders kicks him out of his house.  Just then, Kid Supreme stumbles in and passes out.  Supreme flies off to investigate, and Flanders discovers he can absorb Kid Supreme’s powers, restoring his youth.  He briefly stops himself, but Blackheart enters and has him complete the process. Flanders then flies off, intercepts Supreme, and attacks.  They battle on the National Mall until Blackheart appears and tries to manipulate Supreme.  Supreme retaliates by ripping out Blackheart’s mystical heart, killing him.  This causes Flanders’ powers to transfer back to Kid Supreme.  Flanders reverts to his aged form in midair and starts to fall, but Kid Supreme catches him.  Supreme explains what happened and says they need to get Flanders to a hospital.