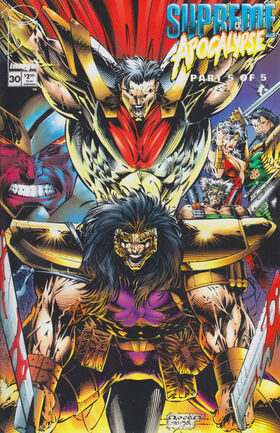 On D’khay, Darkthornn boasts that the death of his infant son on Earth will keep open the crash tunnel transporting his Disciples.  In Washington, D.C., Supreme, Kid Supreme, Brigade, Hatchet, and Psi-Storm continue to battle the invading horde with Vanguard’s robot Wally transporting the Disciples back to D’khay.  Glory protects the infant, unaware he is Darkthornn’s son, until she can hand him off to a police officer.  D.O.C.C. explains to Prophet that Dr. Wells is transferring energy to him from Darkthornn’s terminal device using a black box.  Wells’ plan is to then shift that energy to Supreme so he can return to D’khay and fight Darkthornn.  Prophet rises into the air, crackling with energy, even as the crash tunnel reopens, and more Disciples pour out.  D.O.C.C. transfers the energy to Supreme while, on D’Khay, the Berzerkers watch as Darkthornn’s device explodes.  A new portal opens, and Supreme, Hatchet, and Psi-Storm emerge from it on D’Khay.  The two women rejoin their teammates as Supreme attacks Darkthornn.  Darkthornn retaliates by shoving two cables into Supreme’s eyes and using them to siphon his energy.  Wells tells D.O.C.C. to reverse the energy flow, pouring the energy from Prophet into Darkthornn, causing a massive explosion that destroys the villain’s fortress. Supreme emerges from the rubble, and the Berzerkers teleport him back to Earth.  Reunited, he and Glory kiss while the other heroes prepare to celebrate their victory.  In deep space, an older Supreme strains against the bars of a cell where he has been trapped for months.