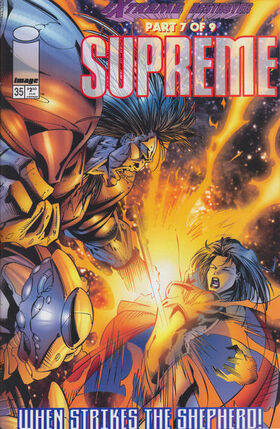 Supreme—now calling herself Lady Supreme—continues to adjust to her new body and its powers. When she attacks a Keep ship, the Shepherd violently repels her, and they begin to fight.  New Man teleports aboard the D.O.C.C. with the Ancient, Kid Supreme, Maximage, and members of Bloodpool and Youngblood.  He contacts its builder, Horatio Wells, and convinces the man to send Prophet to help against the Keep.  On the Keep mother ship, Quantum introduces himself and tells Knightstrike he will lead them to the captive members of Youngblood.  On Earth, Keever observes Vanguard protecting civilians from the Keep’s invasion and worries that the heroes cannot win. Joined by Prophet, New Man’s group teleports to a Keep slave ship and frees Brahma, Cougar, and Shaft.  Captured villains Elemental and Girth use the breakout to teleport away.  New Man then teleports his group away as well.  In Seattle, Dusk and Narcisse have found Reign alive.  Exit teleports in and says a Keep ship has crashed nearby.  Aboard another Keep ship, the other New Men plot their escape, but Byrd says he plans to stay with the Keep.  On the mother ship, Quantum frees Diehard’s strike team, places them in a shuttle with Knightstrike, and sends them all back to Earth.  In space, the Shepherd beats Lady Supreme to a pulp and returns to the Keep armada.