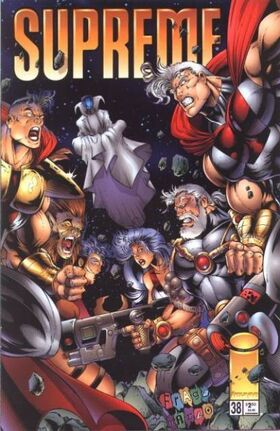 Watching news coverage of the two Supremes’ battle, Ardath tells his assistant Balthazar that now is the time to strike.  Using a device called an Absorbracon, Ardath has been draining power from both Supremes and now Lady Supreme as well.  At the battle site, Loki explains that he helped the original Supreme swap bodies with the older Supreme for amusement.  Rather than fight the Supremes himself, he summons the Starguard to do so in his place.  To protect bystanders, Enigma creates a force field around the battle site.  Lady Supreme tries to talk Starguard down by explaining she is Probe’s future self, but they refuse to listen and attack. She then tells the two Supremes that the members of Starguard are Supreme’s children from the 30th century.  While they fight, Ardath and Balthazar breach the force field, and Loki lashes out at Enigma. Lady Supreme forms a telepathic link with Probe and reviews how she came to her current form.  Ardath knocks out Val-En and reveals that he is Val-En’s future self.  When Lady Supreme first took over his body, Loki brought his consciousness to Other-Earth and made him into Ardath.  He tries to take over his younger self’s body, but an energy backlash incinerates him. Balthazar blames Lady Supreme and attacks her, but she repels him with her heat vision and accidentally burns his legs off.  Probe and reporter Louis Samuels get Balthazar to safety while the Supremes subdue the rest of Starguard.  Loki teleports the team back to their native timeline and grows to massive size, reminding the Supremes that he is a god.