"The Rumblings of Thunder!!" 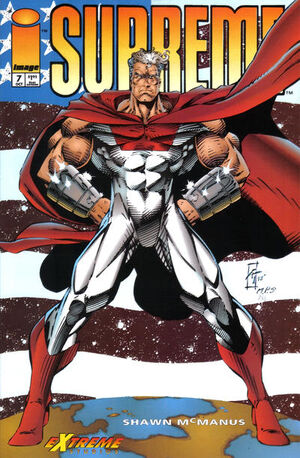 Appearing in "The Rumblings of Thunder!!"

Plot Synopsis for "The Rumblings of Thunder!!"

The members of the Starguard introduce themselves to a stunned Supreme as his children from the future.  They have come to warn him of an existential threat to Earth, but before they can reveal any details, they are summoned back to their own time.  They promise to contact him again and then vanish. Supreme leaves the G.A.T.E. building and is confronted on the street by TV reporter Maxine Winslow.  Blaming him for her father’s death, she calls him a coward and demands to know why he led Khrome to Earth.  Inside, Alexander Graves browbeats Temple for the havoc and controversy surrounding the battle with Khrome and the subsequent damage to G.A.T.E.’s reputation.  He then orders Heavy Mettle disbanded.  In Germany, Thor attacks a G.A.T.E. facility and demands they bring him Adolf Hitler. Temple learns of the incident and radios Supreme, asking for his help.  Immediately upon hearing Thor’s name, Supreme stops arguing with Winslow and takes off.  Thor is an old enemy of his from World War II.  In Germany, a raging Thor is threatening to destroy the country when Supreme arrives to stop him.

Retrieved from "https://imagecomics.fandom.com/wiki/Supreme_Vol_1_7?oldid=73219"
Community content is available under CC-BY-SA unless otherwise noted.