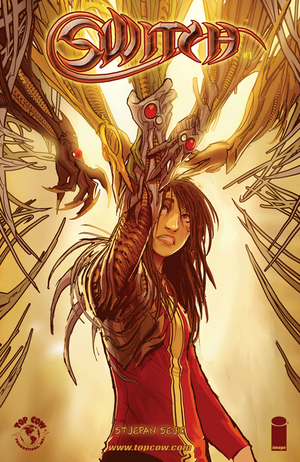 Mary thinks about how the previous Witchblade bearers have all been beautiful. The first one, Una, was swift, wise, and brave. She wonders how she became the most recent considering how she is average and not athletic.

She recalls one day, she was leaving school when her friend Rudy stopped by and gave her a hard time about buying binoculars for alien watching. Mary claimed she had seen UFO's in the sky. As they left school, she spotted Tony Estacado and instantly got a bad taste in her mouth. Rudy wondered why since he had only transferred to their school a week prior. Mary explained she knew Tony from when they were kids. She was best friends with him. However, he inherited his father's estate and was called away. He never called or contacted her so she began to resent him since she assumed their friendship meant so little to him.

That night, Tony had a dream where the Darkness spoke to him. It told him that it had been waiting years and will keep waiting until the time is right. However, he wakes up to find a strange figure in his room. When it attacks him, his bodyguard, Sandra steps in and defends him. However, she is overpowered by the figure. At the same time, Sonatine arrives and uses a medallion to subdue the enemy. He then forces the warrior to reveal how it had been released. It tells them she is an Angelus Warrior and an unknown warrior released twenty-seven of the High Caste warriors. When Sonatine presses about the Angelus, the warrior realizes that Sonatine is afraid. She tells him how the Dominion despises fear. He then opens the nexus to the Darkness 6in his eye and absorbs the creature right before it attacks him. He grows weak from linking with the Darkness.

Later, he sits in his mansion looking at his medallion wondering how he has grown so weak. He recalls the day he first was granted his powers. He was alone, a dark priest in a dead city. His people had left him years ago as they grew tired of his promises to stay loyal to the Darkness. They left looking for better lands and Gods. However, then Tau'ma and Miguel Estacado appeared and granted him his powers. He was told he'd be the high priest to Miguel and bear his powers. He was told that one day he would bear a child, and at all costs he must protect it from those who would harm him. His child would inherit the powers of the Darkness but would not be able to use them until he turns 21.

In the present, Sonatine gets the idea to call Kenneth Irons. He tells Kenneth that the Caste is coming for Tony and they need the Witchblade to protect him. Sonatine tells Kenneth that Sandra has been tested by Tau'ma and has proven she's strong enough to wield it. Kenneth tells him he wants two fragments. One is the fragment he wears around his neck with the shard of Miguel Estacado. The other he tells him he'll ask for later but doesn't divulge which fragment. Sonatine agrees and Kenneth prepares to send the Witchblade by armored truck. However, outside a bird of the Angelus eavesdrops on Kenneth's conversation. It flies back to Celestine to inform her of the deal. She awakens Krono to intercept the artifact.

Later that night, Mary stays up late and UFO spots with her kid brother, Tim. Next morning, she was working at the bookshop her family owns and watching her kid brother. When her brother left to get soda next door, she heard a rumble outside. She went to investigate and discovered Krono attacking the delivery. Krono launched the armored vehicle at a wall, at Tim's direction, as he was trying to break it open to get the Witchblade. Mary dove to push Tim out of the way to save him, but was hit and pinned against the wall as Krono approached to acquire the Witchblade. However, the Witchblade merged with Mary and granted her the regenerative abilities and strength she needed to fight back by channeling the abilities of Una, the first Witchblade bearer. However, when Una's power was not enough to defeat Krono. Zala, another previous Witchblade bearer, took over control of Mary's body.

After millions of views on DeviantArt, this popular web comic finally gets its own series. A teenage girl gets a mighty artifact that grants her immense powers...the catch? It's a bit haunted! This self-contained “universe” includes Artifacts and characters from other series (with permission!) in a delectably STJEPAN SEJIC fashion!

Retrieved from "https://imagecomics.fandom.com/wiki/Switch_Vol_1_1?oldid=55573"
Community content is available under CC-BY-SA unless otherwise noted.