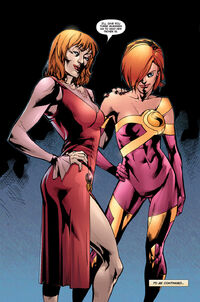 I could kill you any number of ways. I'm leaning towards "painful".

Synergy is one of the many illegitimate children of Captain Dynamo, born of a relationship between the latter and Chrysalis, his bitter enemy.

Her birth was kept secret from the world and she was raised and secretly trained by her parents who exposed her to the same radiation that gave her father his powers, when her father died she and her mother clashed with Dynamo 5 claiming that Synergy was the only one worthy to claim Captain Dynamo's legacy. After failing such attempt her memories were erased by her half-brother Gage who believed that she wasn't truly evil but just misguided, she was entrusted to the care of a priest to help her start a new life.

Unfortunately, shortly afterwards, his memoirs were restored by Michael, Maddie's son born of a previous marriage, who blamed his mother for his father's suicide caused by a post-divorce depression. Synergy and Michael started a relationship and managed to create a plan that would lead to the end of Dynamo 5, the plan was to use a weapon created by F.L.A.G. to deprive the children of Captain Dynamo of their powers after Synergy approached them impersonating Maddie thanks to her powers.

Their plan, however, did not take into account the new powers of Spencer who, after freeing himself, used the weapon to give new powers to Dynamo 5. During the fight Spencer convinced Synergy to perform a mental scan of Michael's mind which revealed that he wasn't really in love with her and that he had no intentions to rescue her mother, realizing she was being exploited Synergy attacked Michael before running away from the scene with a broken heart.

Retrieved from "https://imagecomics.fandom.com/wiki/Synergy_(Dynamo_5)?oldid=65959"
Community content is available under CC-BY-SA unless otherwise noted.