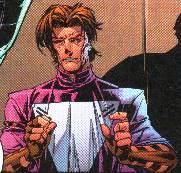 The Tactical Augmented Organism (TAO for short) was an in vitro creation, a being with a tactical mind engineered by Optigen. When Mr. Majestic and Savant went to Optigen to retrieve TAO in order to recruit him for the new WildC.A.T.s, the scientist in charge initially refused to let him go, until TAO made an implied treath of telling the scientist's wife about his many mistresses.[1]

TAO suggested a more proactive approach to the team, so they found HARM's hideout and while fifghting him, TAO coerced Condition Red into shooting HARM's brain, killing him[2]. Then they trapped Attica, Deathtrap and Slag at HARM's funeral[3], but Deathtrap escaped[4] and organized other villains to wage war on the WildC.A.T.s.[5]

During his time, TAO got into a relationship with Savant.

It turned out that TAO had manipulated the events into this city-scale war to have the WildC.A.T.s as an army under his control, which Deathtrap and Grifter found out by comparing notes. When Grifter tried to shoot TAO, Savant crossed his path and got the bullet[6] and when StormWatch member Fuji reached him, TAO broke his mind by trapping him in a looping conversation. TAO also freed the imprisoned Attica and Slag to distract the WildC.A.T.s.[7]

When the WildC.A.T.s finally reached TAO, he was confronted by Majestic, who incinerated him with his optic blasts.[8]

Retrieved from "https://imagecomics.fandom.com/wiki/Tactical_Augmented_Organism?oldid=66925"
Community content is available under CC-BY-SA unless otherwise noted.