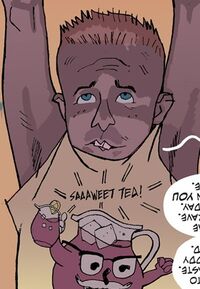 A good player is a soldier, and with enough soldiers -- what you've got is an army.

Tad is a young boy that has lived his whole life in Craw County. When the Running Rebs came to Earl Tubb's home to attack him, Tad was inside watching TV. After Tadd opened his mouth, he was beaten nearly to death by the football team. This inspired Earl to attempt to make a stand against Coach Boss and the Running Rebs.[1]

Later, Tad recovered at the hospital. Since Materhead felt great remorse for the actions they took against him, he frequently visited Tad at the hospital and brought him Running Rebs paraphernalia. Tad began having visions and realized he wanted revenge against Coach Boss for his injuries.[2]

Retrieved from "https://imagecomics.fandom.com/wiki/Tad_Ledbetter_(Southern_Bastards)?oldid=63361"
Community content is available under CC-BY-SA unless otherwise noted.