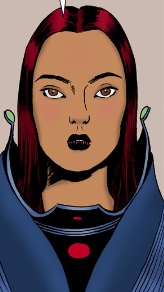 Taj McGill was always close with her older sister, Raveena McGill. Taj majored in business communications and spent much of her time at the Los Angeles Public Library. When she came across the research of Khalid DeGuerre, she joined his movement to bring back the internet which had been banned. They would have secret meetings along with engineer Nebular.[1]

Her sister hired P.I. to research the cost of a home years ago. When Taj needed a PI, she tried to hire him to look into her past.[2]

However, after meeting with PI she returned home to find DeGuerre waiting for her in her apartment. Since she left his group, he murdered her to keep her from spilling their secrets. He found the name Patrick Immelmann written in pen on her hand.[2]

Retrieved from "https://imagecomics.fandom.com/wiki/Taj_McGill_(The_Private_Eye)?oldid=46731"
Community content is available under CC-BY-SA unless otherwise noted.