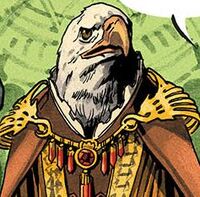 Lord Tallon was First-In-Council of the Seventeen Cities Above the Plain. At Apalis he was present among the gathering of wizards, when Gharta the Seeker presented her plan to call the Great Champion from the past and bring him through time. He rejected the presentation calling it blasphemy against the will of the gods and ended the Grand Colloquy, dismissing the gathering. [1]

Unfortunately Gharta and several wizards ignored his decree and conducted the spell in the city of Keneil resulting in the destruction of the sky city, but also summoning a being who was believed to be the Great Champion. After receiving news on what had transpired from a message spell, Tallon arrived on a rescue hall to extract the survivors from the plains. He intervened in a brewing conflict between Gharta and Sandorst and urged both to speak with him in private with a developing crisis at hand. He asked whether if the rumors of the 'Great Champion' were true and if he may be able to help them. However he learned from Gharta that they Great Champion may have perished. [2]

Retrieved from "https://imagecomics.fandom.com/wiki/Tallon_(The_Autumnlands)?oldid=57468"
Community content is available under CC-BY-SA unless otherwise noted.