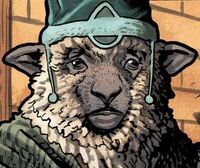 Tavisher was the clan chief of the village of Erries. His clan sheltered Dusty and Learoyd after they were ambushed by the Goat Tribe in the mountains. After they awoke, he greeted them warmly and was relieved to see that Dusty was a wizard and perhaps one who could alleviate his clan's woes. He explained to the two travelers that the nearby mountain had starting shining in strange lights and followed by a plague that was decimating his village and pleaded them to help his village. After giving them a tour and treated the two to a feast, the mountain started acting up again, worsening his fears. He promised to offer what little his village had in assisting Learoyd and Dusty investigate the mountain.[1]

Retrieved from "https://imagecomics.fandom.com/wiki/Tavisher_(The_Autumnlands)?oldid=55997"
Community content is available under CC-BY-SA unless otherwise noted.