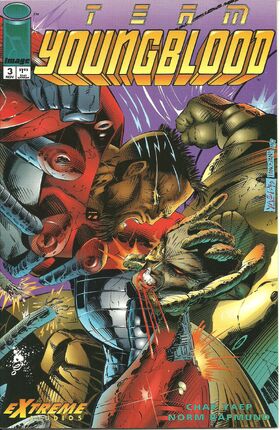 Appearing in "The Final Countdown"

Plot Synopsis for "The Final Countdown"

Across the U.S., superheroes ponder the consequences of the blackout while, aboard Liberty II, Sentinel takes on Giger.  They exchange blows, and Giger flees just as Dutch frees himself. Sentinel updates the rest of the strike team while Dutch locates Giger.  Then, Keever contacts Sentinel and informs him he has an hour to retake the station before the Russians destroy it with a nuclear missile. Cougar, Masada, and Photon continue fighting Cybernet troops until Riptide arrives and uses her powers to knock all the terrorists out.  The team reactivates the communications network just as Sentinel and Dutch catch up with Giger, broadcasting the ensuing battle to the entire world. Sentinel beats Giger to a pulp while Dutch severs Giger’s control of the network and deactivates the station’s self-destruct mechanism.  Defeated, Giger teleports away.  The Youngblood team regroups, and Keever notifies the U.S. President that the crisis is over.

Write the second section of your page here.