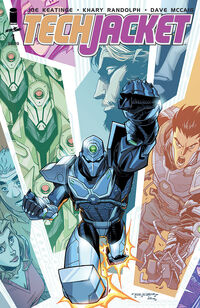 Upon returning to earth he finds his parents home and store empty. He sleeps in the abandoned store but is awoken by the thugs searching for his parents. Zach trounces the thugs and forces them to take him to their boss. After persuading the loan shark to leave his family alone (which the loan shark does as, being a realist, he knows that there is nothing that can beat the tech suit in his arsenal), Zach finds his father who had relocated due to the issue with the loan shark. The last Kresh however return to seek revenge on Zack but Zack once again defeats them only to have his mother return and see the alien bodies littering her lawn.

Retrieved from "https://imagecomics.fandom.com/wiki/Tech_Jacket_(Zack_Thompson)?oldid=66681"
Community content is available under CC-BY-SA unless otherwise noted.