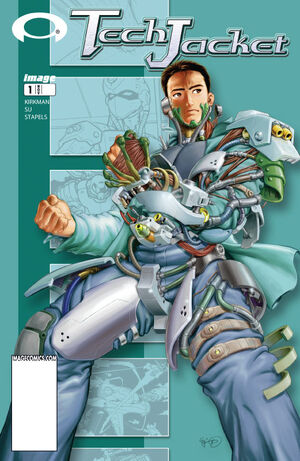 Then there is only one solution. I will use my Tech Jacket to guide the ship from the outside. We have already lost too much for us to let this mission fail.

In the far reaches of space, past any regions known to man, a war rages on. The Geldarians, a peaceful race, have been defending their home world against the violent and savage Kresh for nearly a millennium. When it begins to look as though neither side can gain the upper hand, the Geldarians dispatch a scout team to search the neighboring galaxies for civilizations that may aid them. Disaster strikes and one of the scout ships is forced to crash land on earth. When mild mannered teenager, Zack Thompson comes across the wreckage... things really get interesting.

Retrieved from "https://imagecomics.fandom.com/wiki/Tech_Jacket_Vol_1_1?oldid=56002"
Community content is available under CC-BY-SA unless otherwise noted.