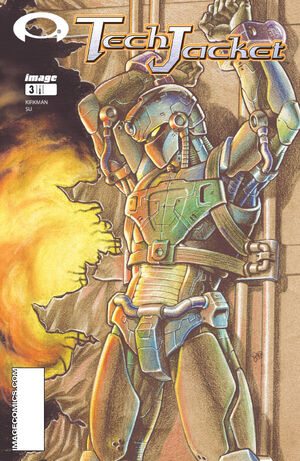 No being should possess such strength...

Zack finds himself between a rock and a hard place when he is forced to make one of the most difficult decisions of his life. Zack has been taken captive by the Geldarians and is being taken back to their home planet for trial and his inevitable execution. What will Zack do when his transport is attacked by a platoon of Kresh soldiers; who have been at war with the Geldarians for decades? Will he help his captors in a fight for their lives or allow them to perish and in doing so, strand himself in deep space with no way of getting home? Pick up the hottest new comic on the block to find out!

Retrieved from "https://imagecomics.fandom.com/wiki/Tech_Jacket_Vol_1_3?oldid=56015"
Community content is available under CC-BY-SA unless otherwise noted.