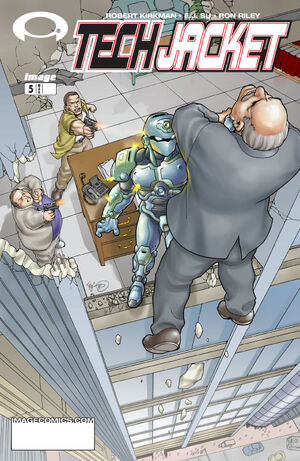 WHERE ARE MY PARENTS?!

-- Tech Jacket (Zack Thompson), holding Mr. Cappella over the edge of a building

With the Geldarian/Kresh war resolved, Zack is trying to settle back into his normal teenaged life on Earth. It's a tough transition, especially when you're under constant attack! It seems word has gotten out about Zack, and it's drawing some rather unsavory characters to earth. It's up to our hero to keep our world safe from these otherworldly menaces. Looks like Zack's going to have trouble finding time to study for that math quiz... but, at least he's got his priorities straight.

Retrieved from "https://imagecomics.fandom.com/wiki/Tech_Jacket_Vol_1_5?oldid=56007"
Community content is available under CC-BY-SA unless otherwise noted.