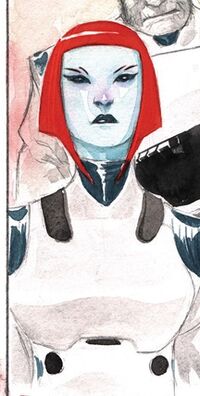 I wouldn't worry, Telsa... if Tim spends much more time around you, I'd say his emotion settings will drop significantly.

Captain Telsa was ordered to retrieve Dr. Jin Quon for space mission. They informed him his Codex theory had been deciphered and the Tim series of robots he had invented fifteen years prior had suddenly been reactivated.[1]

Upon arriving on Dirishu-6 Moon she found another ship had already landed. They quickly armed themselves and relocated the injured Tim-21 robot to their ship to perform emergency medical procedures.[2] Telsa spoke with her father, General Nagoki and believed there could be leak in UGC councel as the other ship of Scrappers couldn't have know their location. Their ship was suddenly captured by the Scrappers and they were brought to Gnish.[3]

Upon arriving, Quon was surprisingly put in an interrogation chair to tell them everything about the Harvesters. After his hand was cut off, he screamed he knew nothing and pleaded he was a fraud, and stole all robotic research.[4] Lord S'Nok ordered he be disposed of but was interrupted with the Hardwire group, a rebel group of robots, bursting into the room in order to free Tim-21.[5]

Upon arriving at the Moon Planet, they were sent to rooms. The robots told them they were not sure what they would do with them yet. Telsa approached Quon in secrecy and told him she was concerned they were planning to kill them. They were behind enemy lines she minded him. However, Jin told her that she was being paranoid and that they'd figure out what to do next.[7] When the two investigated in a restricted area, they found a gigantic Harvester positioned in a shrine. Psius entered and told them they were harvesters to humans, but "Gods" to machines.[8]

Retrieved from "https://imagecomics.fandom.com/wiki/Telsa_(Descender)?oldid=62156"
Community content is available under CC-BY-SA unless otherwise noted.