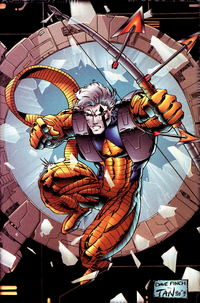 It is unknown where Terrence got his powers or abilities. He was recruited by Morgan Stryker as part of his work in Manigua. Terrance was accidentally killed by a shapeshifting alien Sh'rrrnn, who then took his place in the team.

Retrieved from "https://imagecomics.fandom.com/wiki/Terrence_O%27Donnell_(Top_Cow)?oldid=56614"
Community content is available under CC-BY-SA unless otherwise noted.