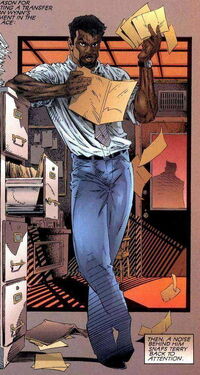 Terry Fitzgerald is Spawn's best friend and ex-husband to his wife, Wanda Fitzgerald. Together they had Cyan Fitzgerald and Terry would do anything to protect his family. Terry is ex-military kept his nose clean, and shirts pressed. He followed rules and was a model citizen.

Upon returning to Earth, Spawn traced his steps to his old life he left five years prior. He saw how Terry was able to provide the life to Wanda he never could and became jealous of Terry.[1] Spawn attempted to leave Terry and Wanda alone but accidentally brought them into his life when he broke into a warehouse to steal weapons.[2]

As Terry and Al Simmons were the only people to have had access to the warehouse and Al was considered dead, Terry came under suspicion by Security Director Jason Wynn.[2]

To add to Terry's problems, Mafia leader Antonio Twistelli's rage for retribution soon became pressing. Several of his men had been murdered and he blamed Terry for them.[3]

When Wynn received pressure from his higher ups on the stolen merchandise, rather than admit his mistakes, he used Terry as a scapegoat and sent his men to monitor his activities.[4] At the same time, the mafia had sent several men to lure Terry to a location to meet with their enforcer OvertKill.

When the Mafia and CIA spotted each other outside Terry's home in Queens, New York, a shootout occurred. The two CIA agents were killed furthering Wynn's case to make Terry look like he's a criminal. The Mafia members told Terry to meet them in an alley or else they would kill his wife.[4]

Terry wanting to protect his family at all costs, headed directly into danger. In the alleyway, OvertKill quickly knocked out Terry and Spawn. They were saved by Twitch Williams shooting Overtkill through the ear with a bullet, scrambling his programming. Twitch called in the situation to headquarters but Wynn's men intercepted the call and ran to the alley to confiscate Terry.[5]

Spawn soon visited Wynn, the CIA, and the Police Department and used blackmail to have all 3 organizations stop the investigation into Terry. This instigated Terry's wife to research why Spawn helped Terry.[6]

Terry couldn't shake why Wynn was after him. He began hacking CIA computers to gain information on Wynn's intentions. He was stopped at every request and realized he needed to escalate his access in order to get to the information he wanted. He stepped into the serpent's lair and decided to join the CIA to get closer to Wynn.[7]

Wynn received his reports that Terry was not Spawn, nor the man who stole his weapons, but maintained his suspicions. He decided to accept Terry into his organization, but knew he'd need to monitor him. Keeping his face, he happily greets Terry and tells him he's going to be in charge of several computer systems.[8]

When Spawn broke into Wynn's office, Terry led the charge with guns blazing to protect his new boss. This broke Spawn's heart seeing his best friend, and now lover of his ex-wife, betray him by siding with the man that ordered his hit.[9] Terry hesitated before shooting Al, unknowingly saving his friend's life.

Terry found out later that evening that Wanda had a run-in with Spawn at their house. He had claimed to be "Al" which confused Terry and Wanda further as to who Spawn could really be.[10]

Terry found himself sick, coughing, and woozy. He pressed on in his research and after a promotion to head of data security, Terry found incriminating evidence that he thought would help nail Wynn.[11] On his drive home, Terry blacked out and ended up in a head-on collision with a truck.[12]

After visiting the hospital, Terry soon learned he was dying of cancer and wouldn't make it longer than a few months. His wife and kid visited him at the hospital and prayed for their father's life. While Spawn initially didn't want to help his now treacherous friend, as he was battling still with the idea that Terry stole his wife and sided with his enemy, he decided to help Wanda and heal Terry of his cancer. This sent Al to Hell as he was warned to not use his powers by Cogliostro.[13]

The doctors continued to be baffled by Terry's miraculous recovery from terminal cancer. They analyzed Terry but got nowhere. At night, Terry continued to have dreams of Spawn and began having dreams that Spawn was actually Al. At the same time, Al was in Hell and reconciled his issues with Malebolgia. When Al agreed to kill once more for Malebolgia in exchange for protection of Terry and Wanda from Hell, he was returned to Earth. In a defining moment, Terry woke up and felt that it was more than "just a dream." He believed his nightmares were telling him something and that Al could potentially be Spawn.[14]

Terry decided to investigate and headed to Rat City to find Spawn. He found the dead bodies of hookers and gangsters strewn across the alley and abhorred that his once long-time friend would have sunk to this level. Terry found Spawn in his throne and learned that Al had been reborn as Spawn. He offered Al a chance to help. He told him that he had traced Wynn's shipments that don't match payers and shipments that had mysterious gone lost. He believes Wynn is secretly supplying many of the terrorists in the world with weapons for personal gain. He told Spawn that if he could return with the guns, he could use it as evidence to nail their mutual enemy, Wynn. When Spawn agreed, Terry hugged him as they are both able to finally put their pasts behind them and become allies once more.[15]

Terry sent Spawn to retrieve Major Forsberg as he allegedly had valuable information to take Wynn down.[16] However, upon retrieving him he could only mumble various words.

Wanda soon discovered Terry's secret activities and yelled at him for keeping them from her.[17] Terry contemplated his actions when Spawn confronted him at his house. Spawn wanted to move on Wynn, but Terry insisted they needed more useful intel first.[18] Spawn warned him he was moving in. Terry tried to stop him but Spawn told him that Wynn had already discovered that he was spying on him and that he was now in danger.[19]

When Spawn's plan failed due to Wynn having a hit on Terry if anything should happen to him, he pleaded to team up with Terry again. Terry was unsure if he could trust him anymore and turned him down.[20]

Cyan and the Shoelace

Cyan began freaking out over the shoelace again.[21] When she began having seizures, they decided they needed to get her help.[22] Wanda took Cyan to a psychologist which enraged Terry. He didn't think they can afford one. Their anger was cut short when Wanda received a phone call and was told she was now pregnant.[23]

Terry accused her at first for being unfaithful. They hadn't been intimate in months and he couldn't believe her.[24] His worries were soon put to rest when a phone call from the doctor revealed they were further along than they had realized.[25]

One night, Wanda began bleeding. Terry rushed her to the hospital for urgent care.[26] This hospital brought Wanda to the labor room as Terry began to fret over her safety. Soon, Wanda give birth to twins to Terry's delight.[27]

Later, Wanda and Terry were called to a crime seen where they discovered Al Simmons' grave had been excavated.[28] Terry began worrying about all the havoc in their lives and how he was spending a lot of time at work. Terry quit his job to save his family. He recalled how Al began losing Wanda to his job and didn't want to make the same mistake. So he packed them up and they decide to move to California.[29]

Terry's wife, Wanda, was killed in a horrible car accident.[30] When Terry attended her funeral, he was approached by Al Simmons. In exchange for telling him where she was headed so that he could hunt down her killers, he placed a protection spell on Terry and his family.[31] 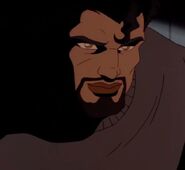