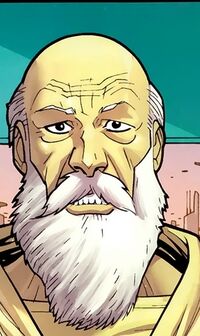 I know some of you have questioned my judgement in starting this Viltrumite War... I assure you our time to strike was upon us...

Thaedus was born on Viltrum. Seeing that the Viltrumites planet conquering was tyrannical and evil, Thaedus chose to betray his race and became the first of his race to rebel against the Empire. He would slay the Emperor Argall of the Viltrum Empire and defect to parts unknown, sending the Empire into disarray.[1] He later established the Coalition of Planets to defend the universe against the Viltrumite threat and battled them for thousands of years.[2] Thaedus then decided he would use his own DNA as a calayst for a virus that would cause the mass genocide of the Viltrumites, though not known to him. [3]

Leading The Coalition of Planets

After leaving Viltrum, Thaedus found members of other alien races and got them to join the Coalition of Planets. He allowed, out of desperation, a breeding program by a Unopan leader that would make Unopans stronger than Viltrumites. The subjects failed until Allen the Alien. Allen was strong, but not stronger than a Viltrumite. After Allen had fought and lost against the Viltrumites, Thaedus decided to shut down the program. Years later, Thaedus was attending a council meeting with the Geledarian leader recently inducted. Allen reported Invincible, a Human/Vilturmite hybrid, was sympathetic to their cause. Thanking him for the information, he relieved Allen and continued the meeting. Later, Thaedus went to see Allen after he was brought to the brink of death. He told Allen that there was a spy in the Coalition council. While Allen was recovering from his injuries, Thaedus had been observing him and realized how much stronger he was becoming. Month laters, He would see Allen, greater than ever, and tell him of his progress. He would go on to say that his strength was near, or at, Viltrumite levels. Allen asked him what how he knew how strong a Viltrumite is. Thaedus then asked Allen's nurse to leave him, and there he revealed that he knew because he is a Viltrumite himself. Until he heard of Invincible, he had believed that he was the only Viltrumite to betray the empire. He then asked Allen to return to Earth to get Invincible to come to Talescria.

Nolan and Allen were successful with their first mission and brought an ally with them. Nolan and Space Racer's battle took place hundreds of years ago. Thaedus observed Space Racer and was shocked that he was still alive, mentioning his high metabolism. Thaedus then sent the two on another mission. Their mission was the capture the second Viltrumite weakness, The Rognars, a race of nearly indestructible and ravenous creatures that could easily feed off and damage Viltrumites. Although not successful, Thaedus sent the two on more missions. The two would venture to many planets and succeeded on some missions. First, Allen and Nolan retrieved Sinlax beetles, an insect that would eat Klaxus plants, a plant that would weaken Viltrumites. Second, they sought out the Gelederians where they would point their direction to Tech Jacket. Third, they sought Battle Beast. Fourth, They tried to retrieve Space sharks with no success.

Thaedus would later meet with Nolan to discuss him moving to a new place because of Allen and Telia having relations. Nolan discussed his concerns with all the advantages they would have and then Thaedus asked him to come with him to Thaedus's secret room. It is there he revealed to Nolan that he had created the Scourge Virus. He revealed that he also created an even stronger strain of the virus. He went on to say that he wouldn't hesitate to use it again if they were close to losing the war. He later sent Allen and Nolan to retrieve Tech Jacket, Invincible, and Oliver Grayson, his Thraxan/Viltrumite son. Their arrival was delayed by a Viltrumite attack led by Conquest. Thaedus would get a report Nolan and his sons being stranded to an unknown planet. Letting his short temper show, he yells at Captain Piker and asks him to leave him. Later, Thaedus gives an order to attack the Viltrumites at the Dridell Outpost, thus beginning the Viltrumite War.

Thaedus learned that Space Racer has rescued Allen and Tech Jacket who were on board of a Viltrumite ship. Happy to see them, he gave them the task of attacking the planet Oola so they could move deeper into Viltrumite terrority. Tech Jacket mentioned that he was growing a beard, much to Thaedus and Allen's annoyance. A month later, it was revealed that Battle Beast was retrieved from space, in a frozen state. Thadeus revealed that Battle Beast had agreed to join the war effort. Thaedus would send Tech Jacket and Allen on various missions including retrieving the Ragnars, and winning over planets. Thaedus called an assembly with other council members and told them about the progress of the war. Their meeting was interrupted when Anissa attacked the Coalition of Planets headquarters. Angered, he believed the traitor was among them. He rushed for the wrong alien, but was attacked by Kregg. He attacked him and rushed for the Coalition traitor, only to be attacked again. He was saved by Tech Jacket and Allen’s arrival to Talescria. Anissa attempted to bear hug Tech Jacket to death, but Thaedus saved him. Tech Jacket recommended that they help Allen, but Thaedus suggested retreating with them because they were spreading their ranks too thin. The tide was turned upon the arrival of Nolan and his two sons. Thaedus and Tech Jacket were taken by surprise with Anissa grabbing them, but were saved by Nolan. He told Invincible and Oliver to guard the unforfeited parts of Talescria. Invincible said that they would but not before Oliver and him flew through the Viltrumite warship. Thaedus and Tech Jacket assisted the duo in throwing the ship into space. The Viltrumites retreated and the Coalition turned its attention to the traitor. The traitor is shot in his face by his partner, wishing to know what the Viltrumites’ plans were. Thaedus intervened and stated that the traitor would pay for his crimes. The traitor revealed that they were going back to Viltrum to regroup.

Three days after the Viltrumite attack, Thaedus prepared a team consisting of himself, Nolan, Battle Beast, Tech Jacket, Allen, Mark, Oliver, and Space Racer. Thaedus told the team that with the Viltrumites leaving, their occupied planets had switched to the Coalition side. Thaedus stated that they would be going to Viltrum. He took the team on a space ship and they flew into space. From there, he would discuss why they would return to Viltrum. He stated that though the planet was a tomb and it would be harder to get through in a space ship. On their way over to Viltrum, He was attacked by Thula, a Viltrumite woman with a blade attached to her hair. She was easily taken out by Battle Beast. Knowing that she would probably tell them that they were coming, he prepared to intercept the Viltrumites. He awaited Space Racer to arrive with the Ragnars and then the Coalition commenced battle. Thaedus attacked Kregg and noticed that Tech Jacket was in trouble. Allen saved him by decapitating his captor with one punch. He then notices that Invincible is heading for Thragg. Invincible was smacked away easily by Thragg. He was then punched by Kregg and thought of a plan that would turn the tide in the battle. He tasked Space Racer with firing his gun, while Thaedus took Invincible and Omni Man in order to destroy Viltrum. He stated that if they wouldn't fly at the same speed, the core would stabilize and they could die along with the explosion. With the assistance of Space Racer’s gun, the trio flew as fast they could and successfully destroyed Viltrum. The trio was captured for a short time by unnamed Viltrumites. The impact of the quadruple attack caused the planet to produce a shockwave which freed them from the clutches of the Viltrumites. With the planet destroyed, he offered the Viltrumites that chance to surrender. Thragg, enraged by his actions, proceeded to attack Thaedus. He rushed towards him and decapitated Thaedus, killing him.

Retrieved from "https://imagecomics.fandom.com/wiki/Thaedus?oldid=63661"
Community content is available under CC-BY-SA unless otherwise noted.