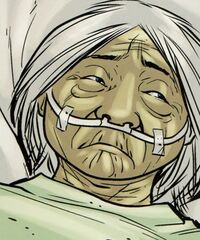 Thang Vang called May Tao to look at something she stole from cleaning white people's homes. It was a ring that caught Blaine Abel's eye. She was then attacked in her home and had her ring stolen by Blaine.[1]

May later headed back to Mrs. Vang's home to complete the story. She stumbled into the basement where she found Mrs. Vang knocked out with a circle and ornamentation hung up in some form of a ceremonial configuration.[1]

After escaping from Blaine who was stalking her as well, May Tao headed to the hospital to ask Thang Vang where the ring came from. She figured the Creep wanted the ring. Vang told her it came from Mr. Meyers' house and she had stolen it while cleaning.[2]

Thang sent a letter to Joe apologizing for stealing the ring. When Joe Meyers returned for the ring in the hospital, she told him she had misplaced it and instead made a ring replacement for him. He self-immolated in her room upon hearing the news. Later, Thang made further penance by making a blanket for May Tao to apologize for getting her wrapped up in the kidnapping.[3]

Retrieved from "https://imagecomics.fandom.com/wiki/Thang_Vang_(Revival)?oldid=61990"
Community content is available under CC-BY-SA unless otherwise noted.