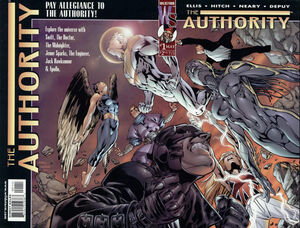 Previous Issue
Next Issue
—
The Authority #2

You want weird, I'll tell you how I met The Doctor sometime. I'm nearly a hundred years old and the bastard gave me goosepimples for days.

Appearing in "The Circle (Part I of IV)"

Plot Synopsis for "The Circle (Part I of IV)"

Half of Moscow is destroyed as a large number of superhumans attack the city and destroy large chunks of it, as well as killing several hundreds of people. In New York City, in the United Nations building, Jackson King and Christine Trelane sit and gather reports on Moscow's situation. King expresses his disgust at no longer having a StormWatch team to deal with international crises. Suddenly, a glowing yellow Door appears, and Jenny Sparks comes through it, informing them that she had formed her own team after StormWatch was retired. She assures them the Moscow situation will be dealt with.

Meanwhile on Gamorra Island, Kaizen Gamorra revealed to his troops his plans to announce his return to the world by cutting three knots upon the Earth. Moscow was the first, and two more are to follow. He sends his soldiers, who it turns out are the ones that destroyed half of Moscow, out to attack the second target.

Jenny returns to The Carrier, a ship that exists in The Bleed which her and The Authority have commandeered. She briefly confers with Jack Hawksmoor and Swift. She sends Hawksmoor to survey the damage in Moscow and investigate. Once there, Hawksmoor discovers residual radiation from a mass teleport system, like StormWatch's transfer bays. Back on the Carrier, Jenny briefly confers with The Engineer, while The Doctor has a conversation with all the previous Doctors. A short while later, the Engineer discovers a trace of teleportation energy in London. The Authority arrives in London, ready for action.

Retrieved from "https://imagecomics.fandom.com/wiki/The_Authority_Vol_1_1?oldid=68562"
Community content is available under CC-BY-SA unless otherwise noted.